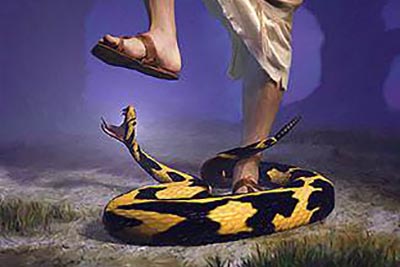 Did you ever hear of the HATFIELDS AND THE McCOYS? I am sure you have! They are the age old version of “THEY HATE EACH OTHER’S GUTS!” They 💘 loved to hate each other! They lived to destroy each other. It was their purpose driven life. Kill one another! They were Jerry Springer’s dream come true! Jerry Springer, the alpha buzzard of 📺television feeding upon decaying relationships.

Movie series, books, and songs have been made about the feuding maniacs – the Hatfields and the McCoys. People never tire of watching them vent their hostilities, because through these psychopaths somehow it enables them to vent their own.

No one seems to know the reasons for all the fuss and puss between the Hatties and the Macs. All that matters is that it has been that way forever, and that is reason enough. So, keep your eyes peeled and your heads low! One or the other is bound to let fly at any second, for they are just itching to do so! An itch that never ends and has to be scratched!

And so the rootin tootin shoot ’em up feud went on and on in the Tug Valley between West Virginia and Kentucky. It took place in the 1800s, though the bloody lore continues to this day.

We haven’t seen anything like this! We should have seen it coming, but we didn’t! But what is prophesied in the Word of God will come to pass! It is not a matter of probability, only a matter of certainty.

“AND I WILL PUT ENMITY BETWEEN THEE AND THE WOMAN, BETWEEN THY SEED AND HER SEED, HE SHALL BRUISE THY HEAD, AND THOU SHALT BRUISE HIS HEEL.”

Sounds like a recap of the Hatties and the Macs. But in that case, both seed lines were bad 👎 seeds. In this case, there is a good seed line and a bad seed line. In both cases, they have enmity for each other. No love 💘 loss.

The Lord Himself told us it would happen! He declared it in stark fashion – ENMITY BETWEEN TWO SEED LINES – DIVINE SEED 👼 and DEMON SEED 👹.

The WOMAN 🚺 is not referring to Eve, but to the Virgin Mary, the mother of the MALE-HE-SEED. This is the earliest and original pronouncement of the Gospel of Jesus Christ!

The original Gospel is not given in the setting of 💓 love, but in the setting of 💔 sheer animosity! Never forget that! ANTITHETICAL SEED ENMITY! An antithesis which makes the HATIE MAC FEUD look like Mr. Rogers Neighborhood!

THE ENMITY HEATS UP

Samuel Clemens was a gifted writer. He is better known by his pen name – MARK TWAIN. TWAIN was an avowed enemy and fierce critic of Christianity!

TWAIN once referred to Christianity as a SLAUGHTER HOUSE RELIGION, pointing his disgust at the blood Gospel of Jesus Christ. He waged his verbal war at the GOOD SEED, attacking the followers of Jesus Christ!

TWAIN married OLIVIA LANGDON, a Christian from a Godly family. He hid his contempt for Christians from her, but eventually it began to pour forth. It not only destroyed his marriage, but shattered his wife’s faith as well.

The 😂 joining of the two seeds is not only heart rending, it is impossible. The antithetical seeds are ununitable! They are unblendable! They are incompatible!

“What fellowship hath light with
darkness?”

It is a rhetorical question? It is the same as asking, “Can Heaven be Hell?”

Never before in the United States of America are Christians being so open!y attacked! Mark Twain would be at the head of the protest marches. He would thrive on the 2020 atmosphere! It is toxic!
Christians have been martyred and persecuted throughout history, but now the line is being drawn in America for all to see.

It appears in Genesis 3:15 that the ENMITY BEGINS WITH THE SEED OF SATAN! He is designated in the primary and originating position – THEE and the woman, THY SEED and her seed!

Just a few examples must do in this ENMITY ripe enviornment!

1. Christians are being called by a prominent politician, “BIBLE THUMPING GUN TOTING DEPLORABLES.” In fact the verbal attacker called Christians “A BASKET OF DEPLORABLES.” Sort of like a bunch of worms in the same compose heap. All of them DEPLORABLE! Something you wince at and hate! DEPLORABLE! I DEPLORE MEANS I HATE! 😝 THE STRONGEST OF NEGATIVES! ENMITY FULL BLOWN! SEED ENMITY! 👺

By the way, this politician was voted down in her bid for the Presidency of the United States mind you! There is no doubt that the SEED OF THE WOMAN had everything to do with that. It was THE WAR OF THE SEEDS IN THE VOTING BOOTHS ACROSS AMERICA, and the SEED OF SATAN WAS UPROOTED AND BLOWN AWAY!

IT WAS THE MOST VILE PROCEEDING EVER WITNESSED IN AMERICAN GOVERNMENT. THE ROT AND ENMITY OF SATAN’S SEED HAD NEVER BEEN THIS MAD 😠! STAY TUNED! THE NEXT PRESIDENTIAL ELECTION WILL BE THE WAR OF THE SEEDS NOT ONLY, BUT THE WAR OF TWO WORLDS AND TWO KINGDOMS.

3. Most people, even the people of God, don’t understand the venom being spewed as the war of the seeds! They see 👀 it as merely left wing right wing politics! Nothing could be further from the truth!

Mass murders at Jewish synagogues and Christian houses of worship. It all is viewed as the atrocities of mentally deranged maniacs 👻. Rather than recognizing the SEED WAR, it is much more comfortable and entertaining to think about and watch replays of the Hatfields and the McCoys starring KEVIN COSTNER! When the real issue is SEED ENMITY! 👺 SEED WAR! 👿

4. A pro-life, God confessing President impeached by the majority in the House of Representatives as a tyrannical power abuser and a traitorous obstructionist! Dirty politics? Perhaps!

But more to the point, this is THE CLASH OF THE SEEDS! SEED ENMITY 👺! At issue are WOMEN’S RIGHT TO KILL, GAY RIGHTS TO PERVERT, SPOUSES RIGHT TO HOMOGENIZE, GOVERNMENT RIGHT TO COMMUNIZE, STUDENT RIGHT TO THIEVERIZE to name just a few.

Satan’s kingdom is being threatened, and he is not going down without a fight! In fact, Nebuchadnezzar is turning up the heat and making the furnace 7 times 🔥 hotter!

Elohim, the God of gods, and the Lord of lords, announced it after Adam and Eve sided with the Devil and against God! They sowed the seeds of anti-God and pro-Satan in the 🌎world.

The dye was cast, and God would have the last word! You can’t choose sides against God and win!

“AND I WILL PUT ENMITY BETWEEN THEE AND THE WOMAN, BETWEEN THY SEED AND HER SEED, HE SHALL BRUISE THY HEAD, AND THOU SHALT BRUISE HIS HEAL.”

FIRST of all, whatever those words mean, God spoke them to Satan! God has Satan alone in His crosshairs, and God doesn’t miss. God goes to the heart of the matter! He speaks to the source of all evil that has now come into the world! And He tells Satan that He will not get away with it. Someone’s head is going to roll, and it is not God’s!

SATAN IS NUMERO UNO ON HEAVEN’S WANTED LIST. THERE IS HERE AN ALL POINTS BULLETIN BEING ISSUED IN Genesis 3:15! SATAN – DEAD OR ALIVE!

There is no DETENTE here! This is not a proposed SUMMIT. This is not LET’S MAKE A DEAL. There is no COMPROMISE here.This is not I’LL MEET YOU HALF WAY. This is SHOOT TO KILL! The only GOOD DEVIL IS A HEAD CRUSHED DEVIL! DESTROY HIS EVERY WORK – OPEN SEASON ON HIS EVERY DEED! There is no BIPARTISANSHIP IN OUR DEALINGS WITH THE DEVIL AND HIS DEMON SEED! IT IS UNILATERAL, GOD’S WAY OR THE HIGHWAY! Leave it or lump it!

SECOND, we forget to our own peril that the ultimate obsession of God is the SMASHING OF THE SNAKE’S HEAD. Know who the enemy is, so you don’t waste shots!

“FOR OUR WARFARE IS NOT AGAINST FLESH AND BLOOD (PEOPLE)…..BUT AGAINST THE RULERS OF THE DARKNESS OF THIS WORLD (SATAN AND HIS DEMONS…..)”

1. Listen, when you have suicidal thoughts, they are Satanic! Satan is messing with your mind! He will tell you that your not alone, and that lot’s of others do it! He will present suicide as a popular and valid way out! When in fact, it is the horrible sin of SELF MURDER! CRUSH HIS HEAD, STUMP YOUR FOOT AND REBUKE HIM IN THE NAME OF JESUS! And while your at it say to him, “TO HELL WITH YOU!!!”

SATAN hates you! Satan is incapable of love! He is the essence of ungodly and unholy hatred! He wants you dead and in hell with him forever. ETERNAL DEATH! Satan is the DEVIL OF THE DEAD.

GOD loves you! He is the pure essence of love. He wants you to live with Him in Heaven forever. ETERNAL LIFE! God is the GOD OF THE LIVING.

2. You are now desperately thinking about killing your baby 🚼 in your womb. ABORTION. Your thoughts are Satanic.

Understand that SATAN AND HIS SEED 👹 HATE BABIES! Satan has been killing babies for aeons. He invented false, demonized religions in which parents sacrificed their children in fire to false gods. He tried to kill baby Baby Jesus 🚼 the moment He was born. He killed hundreds if not thousands of babies to get at Jesus! He is the FATHER OF INFANTICIDE!

Each new baby brings anew the image of God into the world! We are each created in the IMAGE OF GOD! Satan loathes God and anyone and anything that reminds him of God. He wants to remake the world into his devilish image.

Your decision will either be a DEVILISH ONE OR A DIVINE ONE! You are on the front line of the war of life or death, love or hate, heaven or hell!

3. You are on the brink of buying into the LGBT darkness and deception. You may even be considering TRANSGENDERISM, changing yourself from a man into a woman, from a boy into a girl! In other words, REVERSING YOUR GENDER!

The WAR OF THE SEEDS has never been so BRUTAL, BLOODY, and BLASPHEMOUS! LGBT, LESBIANISM, GAY PRIDE, BISEXUALITY, AND TRANSGENDERISM ARE ALL SATAN’S WORK TO TURN THE HOLY INTO THE UNHOLY, THE SACRED INTO THE SINFUL, THE DIVINE INTO THE DEMONIC!

THE ENMITY OF THE SEEDS

What does the Word ENMITY MEAN? In Genesis 3:15, God says that He will:

“ENMITY is nothing more and nothing less than INTENSE HATRED!”

“YOU WHO LOVE THE LORD, HATE EVIL. HE PRESERVES THE SOULS OF HIS SAINTS, AND DELIVERS THEM FROM THE HANDS OF THEIR ENEMIES. ”

Suffice it to say for now:

That is the intense WAR OF THE SEEDS – LOVING THE ONE AND HATING THE OTHER! The SEEDS AND THEIR SEEDLINGS SERVING GOD OR SERVING THE DEVIL!

“YOU CANNOT HAVE GOD AS YOUR FRIEND WITHOUT HAVING SATAN AS YOUR ENEMY.”

“YOU CANNOT HAVE SATAN AS YOUR FRIEND WITHOUT HAVING GOD AS YOUR ENEMY!”

“WHERE THERE IS LOVE FOR ONE, THERE WILL BE HATRED FOR THE OTHER!”

There will not be either or, but both and! That will be the WAR OF THE SEEDS:

“FLAMING HOT LOVE FOR ONE AND FROZEN COLD HATE FOR THE OTHER.”

In the LAST DAYS WAR OF THE SEEDS, there will be no 70 degree comfort zone religion!

Come Now – Be Reasonable The War Of The Seeds Pt. 2