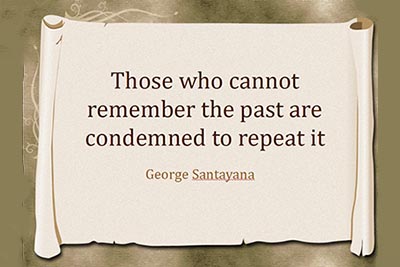 History ♓ has a way of repeating itself, if not in actual itemized detail , then certainly in principle! Have you ever said to someone, “DE JA VU? ” Been there, done that!

We have have various ways of pointing out life’s redundancy:
1.What goes around comes around 🔁!
2.What goes up 👆 must come down 👇!
3. For every action ➡ there must be an opposite and equal reaction ⬅!
4. This place is so familiar to me!
5. I know that I have 👀seen you before some place.

REPETITION! Which leads to this exchange – “How are you doing George? – Oh you know how it is, SAME-O SAME-O!” The monotony of repetition 🌑🌒🌓🌔🌕🌑🌒🌓🌔🌕. A huge part of every day life!

At the same time, our powers of perception are far from keen and reliable so often! At times totally a failure 📧! The boat ⛵far out at sea appears to be standing still even though it is sailing at 12 knots. And the tree 🌳across the street appears to be walking even though it is deeply rooted. Wrong on both counts ❌❌. It is hard for us to even distinguish motion from motionless.

It is difficult for us to get a handle on history♓, and what direction it is going. To many people, history ♓ seems to be written with invisible ink on pages that have no edges! No movement, no meaning, no maturing,
Just an endless round of boredom. All that most people know is, “TGIF -Thank God it’s Friday 😄!”

Thank God that history ♓ is constantly and faithfully repetitious 🔁🔢! It happens daily, monthly, yearly! We don’t talk or think about it much, but we do count on history repeating itself. Even though we do at times complain about the redundancy if not the monotony of it all!

SUNRISE, SUNSET, as the old song goes! Like DAY 🌕 and NIGHT 🌙 and DAY 🌕 and NIGHT 🌙. RISE 🙅🚿, WORK🔧🔨💼, ACHIEVE 💲🎓, REST⌛, SLEEP💤, DAY🌕, NIGHT🌙! History in productive repetition! We refer to them as ENDLESS ROUNDS. THE WORLD WOULD BE IMPOSSIBLE WITHOUT THEM.

It is so well captured by the simple story in the Bible of the prophet ELISHA AND THE SHUNAMITE WOMAN in II Kings 4:10.

A simple mundane picture where the room she supplied the prophet contained the following,

Not exactly ROOMS TO GO or NEBRASKA FURNITURE MART!

But it was all that Elisha needed. When it comes right down to it, we really don’t need much 🍠! We really don’t. We all have our needs and wants messed up! What we want we need, and what we need we so often don’t want.

For Elisha it was the daily repetitious round 🕖🕔 from bed to candlestick that enabled Elisha to fulfill his calling! Life is filled with far more repetitious routine 🔁 than rapture 🔆! If we lived on moments of rapturous ecstasy, we would get nothing done!

Life could not be undertaken successfully without steady and even laborious repetition 🔁. Hear it,

“ELISHA’S LABOR FOR TRUTH CAME THROUGH THE ROUNDS OF REPETITION.”

It is the same for us, whatever that labor be! Six days you shall labor and do all your work! This says the Lord!

Blessed repetition! WINTER 🍙 and SPRING ☔ and SUMMER 🌕 and FALL 🍁 follow the same returns. Our fruits 🍎 and our grains🍌an d our vegetables 🌽 follow the lead of history’s Pete 😇 and Repeat 😇! Thank God for good repetition built into His creation. Repeat is the best friend Pete could ever have!

THE FAMILY – THE HEADWATERS OF REPETITION

Or as the old saying puts it,

“THE APPLE 🍎 DOES NOT FALL FAR FROM THE TREE!”

The waters of repetition chiefly flow through history♓ from their headwaters THE FAMILY 👪!

After all that is where history ♓ began – with family 👪. It all started out g💺ood, in fact very good! (Genesis 1:31). But then Adam and Eve the first married couple 💑 and the first parents fell off the boat into sin, and history’s BAD REPETITION BEGAN!

The next thing we know is their son Cain killed 🔪his brother Abel, and murder began to repeat itself in the human family 👪 down through history.

You wonder what the parents of Adolf Hitler 😈, Ted Bundy 😠, and the Menendez Brothers 😡😡thought about their boys? The seed of murder was sown in the human race, and the murder tree took root and grew and branched out through history ♓ ever since! You never know who is hiding in the branches, and what serial murderer will fly out next.

“THAT GOD VISITS THE INIQUITIES OF THE FATHERS UPON THE CHILDREN, UNTO THE THIRD AND FOURTH GENERATION OF THEM THAT HATE GOD.”

“AND THAT GOD SHOWS LOVINGKINDNESS TO THOUSANDS OF THEM WHO LOVE HIM AND KEEP HIS COMMANDMENTS.”

History in dark 🌑 and 🌕 bright repetition! History has two VISITING ROOMS loaded with bad and good seed! These seeds like HOMING PIGEONS KNOW EXACTLY WHAT PEOPLE TO VISIT AND PLANT THEMSELVES IN! HISTORY’S TWO REPITITIOUS VISITING LINES ♒. EVEN THE 4TH GENERATION OF GOD HATERS AND GOD LOVERS CANNOT DODGE THE BAD AND GOOD VISITORS!

President Donald Trump 👤 cursed repetitively in His presidency. Harry Truman reincarnated! Donald is a very profane man! Not too many words came out of His mouth unattended by HELL 🔱! That is the way it is with swearers in case you haven’t noticed. They major in SLANGUAGE. It was HELL 🔱THIS AND HELL 🔱 THAT! It was and is his favorite curse 💢 word!

In his campaign for a second term, he made the statement that HE WOULD FIGHT LIKE HELL 🔱 TO RETAIN THE WHITE HOUSE 🏢!
It was like he made a covenant with HELL, and that he was counting on the more favorable assistance from the Prince of Darkness 👹 than from God Almighty Himself!

And you cannot have it both ways,

“YOU CANNOT WEAR GOD’S COLORS AND FIGHT THE DEVIL’S BATTLES.”

AS much as he advertised Hell 🔱, the Dark Prince 👹 turned against him and beat him bad! The same way the anti-Christ shall turn against his followers in the Great Tribulation!

There is a strong REPEAT possibility that President Trump’s son BARRON will also HELL his way through life.
We read in Proverbs 22:6 the great principle of repetition in the Bible,

This all so far stands to reason, for individual human behavior is repetitive 🔢 too! We read in Revelation 22:11,

There is something huge that we must get ahold of if we are to understand the LAST DAY’S HISTORICAL ♓ REPETITION 🔁 that we are now living in.

“PUT ON THE LORD JESUS CHRIST, AND MAKE NO PROVISION FOR THE FLESH 🙉.”

***
More than that, we must note that Paul talks about THE FLESH as having its own personal identity – like THE GODFATHER, THE HITMAN, THE MOLE, THE SHOOTER, THE FLESH! THE FLESH IS LIKE A PERSON WITHIN A PERSON!

Think of it this way:

“SIN WAS BORN AND LAY IN THE SAME WOMB WITH EVERY MAN 🚹🚹!”

“EVERY MAN 🚹 BY NATURE HAS SIN AS HIS TWIN BROTHER NAMED THE FLESH🚸.”

If you will, for each one of us by nature,

That is Paul’s analogy! DISTINCT BUT ONE!

“NO MAN HATETH 😝 HIS OWN FLESH (BROTHER), BUT NOURISHES AND CHERISHES 💓 IT.”

Man 🚹 does not hate his twin brother FLESH, but rather loves FLESH! He feeds it’s sinful hunger, and hugs it dearly! They love the same corrupt hot and spicy 🍜 cuisine 👔👙.

I guess we can call them THE FLESH BROTHERS. Maybe we should call them FLASH 😠 AND FLESH 😠! FLESH IS A LOOK ALIKE PICTURE OF FLASH! AND THE MOMENT THE FLESH 🙉 SUGGESTS SIN TO FLASH, FLASH 🙉 RUNS TO SIN IN A FLASH ✖!

“MAN 🚹🚹 HAS TWICE THE POTENTIAL TO SIN AND REPEAT SIN, THAN HE DOES TO DO AND REPEAT RIGHTEOUSNESS!”

Man’s closeness to and love for his twin brother THE FLESH is so strong, that Jesus goes so far in Matthew 18:9 as to liken sin to,

Nothing is dearer than that! Of course, man has two eyes, and by nature man 🚹 not only has an eye for sin, but two eyes 👀for sin!

“MAN HAS TWICE THE POTENTIAL TO HAVE SIN AS THE APPLES 🍎🍎OF HIS EYES 💩 AND EAT TWO OF THEM, THAN TO EAT ONE APPLE OF RIGHTEOUSNESS!”

Now we understand why:

It is always AN UP HILL BATTLE FOR THE KINGDOM OF GOD VERSUS THE KINGDOM OF SATAN! IF YOU WILL, THE ODDS ARE STACKED AGAINST LIGHT 🍚 VERSUS DARKNESS 🌑!”

In the 2020 election, THE FLESH 🙉👧PEOPLE WON, and THE 🔵 SPIRIT PEOPLE COULD NOT REPEAT VICTORY! IT WAS A DEVASTATING LOSS ON MANY ISSUES! MORE FLESH 🙉 PEOPLE VOTED THAN SPIRIT 🔵 PEOPLE VOTED.

And because unbelievers far outnumber believers, believers must triple if not quadruple 🌕🌕🌕🌕every BATTLE with sin and darkness 🌚🌚🌚!

When it comes to HISTORY REPEATING RIGHTEOUSNESS, PETE HAD BETTER HAVE 4 REPEATS IN THE BOAT⛵if the boat ⛵ is to remain afloat.

THE CRUCIFIXION OF CHRIST

“THOSE WHO BELONG TO CHRIST JESUS HAVE CRUCIFIED THE FLESH 🙉 WITH IT’S PASSIONS AND DESIRES.”

The fact is that man would much rather CRUCIFY CHRIST than to CRUCIFY HIS SOUL BROTHER THE FLESH 🙉. For if THE FLESH 🙉 DIES, FLASH 🙈 DIES TOO! SOUL BROTHERS IN LIFE AND DEAYH!

Christ’s contemporaries not only crucified Jesus, they mockingly 😆😆😆 enjoyed it! They made a sneering game out of it! It was a sport to them! Including gambling for his garment! Spitting on his face! Pulling His beard out of His cheeks! Anything to demean and disgrace!

“AND WHEN THEY HAD TWISTED A CROWN OF THORNS, THEY PUT IT ON HIS HEAD, AND THEY PUT A REED IN HIS RIGHT HAND, AND THEY BOWED THE KNEE TO HIM AND MOCKED HIM SAYING, ‘HAIL, KING OF THE JEWS.'”

While feigning His coronation 👑, they jammed a crown of thorns down into His forehead and skull, with the blood 🔴 running down his face and head and neck. Not a gold crown, not a bejeweled crown, but a nasty, vicious, gnarled swirl of thorns thumped down into His head.

They put a REED in His right hand instead of a SCEPTRE! It was done in jest 😆, though they crucified Him in fiendish hatred 😖!

Little did they know, that when they laughingly and mockingly nailed THE KING OF THE JEWS TO A CROSS, THE GOD OF HEAVEN AND EARTH 🌎 NAILED ‘THE FLESH 🙉’ TO HIS ONLY BEGOTTEN SON. Ole FLESH 🙉 MONGER THEN GOT CRUCIFIED TOO,

AND WHEN JESUS DIED, THE FLASH-FLESH BROTHERS 🙊 DIED WE DIED! THE CONSTANT AND HABITUAL AND REPETITIVE ROUNDS OF UNRIGHTEOUSNESS 🌑WERE FINALLY ENDED!

THE REIGN OF TERROR OF THE FLASH-FLESH BROTHERS CAME TO A BLOODY END! MUCH LIKE BONNIE AND CLYDE!

Now through faith in the crucified and risen and reigning Christ, we enter a whole new life of REPETITIOUS RIGHTEOUSNESS 🌝 WORLD WITHOUT END!

PETE NO LONGER FALLS OFF THE BOAT, BUT REPEATS EVERY DAY A STRAIGHT COURSE TO HEAVEN!

Meet you there my old friend Pete! Sail on Silver boy! Sail on! All the way to glory! Amen!

When Christmas Lights Go Dim Pt. 2 The Baby Is The Man

God's Will, Prophecy, Sin And Punishment

The Corona Virus And God Pt. 1