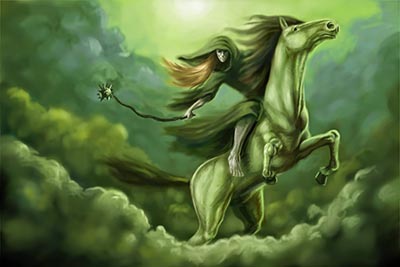 GOD DOES WHAT HE SAYS HE WILL DO

He told David through the Prophet Nathan that He would kill his baby boy. It would be an eye for an eye, a tooth for a tooth! Baby for Uriah! God forgave David of His sins, but the Word of God continues to work!

“I SHUT MY MOUTH BECAUSE GOD YOU DID IT!”

I don’t want to say anything stupid or displeasing to You God. You know, like,

“IT’S FLU SEASON, AND WHEN THE WEATHER GETS WARMER, IT WILL KILL THE CORONA VIRUS.”

In other words, it is all natural and human and has nothing to with the SUPERNATURAL AND THE DIVINE.

I know that God does not make flippant promises and idle threats! What He says He will do, HE DOES! Numbers 29:13,

The 4 HORSES in Revelation 6 are not retired in some barn in Kentucky for stud service! The White Horse, Red Horse, Black Horse, and the Pale Green Horse are not Walt Disney’s answer to the Lion King. The four horses are not kids day at Grandpa’s horse farm.These horses are metaphors for harsh end time realities signaling the return of Jesus Christ and eternal judgment!

The rider on the PALE GREEN HORSE IS DEATH. This rider is not the wages of sin, but is the final work of disease. Over 400,000 across the earth have been sickened, and over 20,000 have died. The numbers grow by the minute. The PALE GREEN HORSE is gaining speed and endurance! Corona Virus globally matastasizes!

GOD HOLDS BACK NO LONGER

The Psalmist puts it this way,

“HE SHALL NOT KEEP HIS ANGER FOREVER!”

The dam has burst, even as in Noah’s day! The door of the ARK IS STILL OPEN, and that ARK IS JESUS CHRIST! Will people go through the door, confessing their sins and accepting Jesus as their ARK OF SAFETY? They did not in Noah’s day, and the door was finally shut as the waters broke forth from above and below.

Does God get a kick out this, some sinister satisfaction? The Prophet Jeremiah tells us in Lamentations 3:33,

“THE LORD DOES NOT WILLINGLY AFFLICT THE CHILDREN OF MEN.”

He shares in the suffering while He inflicts it! He feels the pain of His blows!

“GOD TAKES NO DELIGHT IN OUR GROANS, HE FINDS NO PLEASURE IN OUR TEARS, EXCEPT THOSE THAT ARE PENITENTIAL.”
…

How did the global GAY POPULUS RESPOND? They crusaded for homosexual and lesbian fidelity. That is to say, stop serial perversion and be faithful to one pervert.

Did they repent and turn from their sin when the GREEN PALE HORSE RAN THEM DOWN? No, but rather to vindicate their moral bankruptcy, they caste Jesus and His disciples as a HOMOSEXUAL COMMUNITY! Instead of turning to Jesus for forgiveness, as the Bible says, “THEY PUT HIM TO AN OPEN SHAME.”

The world 🌎 has moved on, not forward but backward, not upward but downward, not higher but lower!

The human race has become contra-and sub-human. Man has slumped and slimbed into LGBT! Man has controverted all the CREATED ORDER OF GOD, and contradicted ALL THE LAWS OF THE CREATOR AND CREATION! In so doing, he has become the antonym to his true created nature! HE HAS PUT THE CROWN 👑 OF GOD’S CREATION – MAN – TO AN OPEN SHAME.

WHAT will man do? Will he again sleep with JONAH, while THE COVID 19 TEMPEST CHOKES HIS LUNGS AND ROARS AROUND HIS EARS? There is no more dreadful sign of a man’s debauched condition than to be unconcerned and unfeeling in the midst of pandemic suffering and death.

The MEDIA IS TOTALLY DUMB AND DENSE TO THE GREEN PALE MUSTANG, and the FEEL-GOOD PREACHERS TALK ONLY ABOUT OUR AUTHORITY IN CHRIST TO TAME THE MAVERICK! No warning, no call to repentance, no turning from sin to the SAVIOR.

That is a double hardening of the heart! And so man’s heart becomes like an ANVIL AND BECOMES HARDER WITH EVERY BLOW!

The time for America and the 🌎 world to REPENT IS NOW! I mean now, not later!
Hear 👂 it:

“IF GOD’S TODAY IS TOO EARLY FOR OUR REPENTANCE, OUR TOMORROW MAY BE TOO LATE FOR GOD’S ACCEPTANCE!”

Leigh Ann Tuohy and her husband Sean were riding down the street with their family on a cold rainy ☔ night. They saw a large young black man walking🚶in the dark. They first passed him, and then suddenly Leigh Ann said to her husband,

Those two words transformed their lives, and rescued the young man by the name of Michael Oher. Not only did the Tuohys find the heart of God, Michael found the love of Jesus. He eventually became a professional football 🏈 lineman for the Baltimore Ravens! (THE film BLINDSIDE CHRONICLES, THE MOVING TRUE STORY.)

AMERICA in every way must TURN AROUND, turn from ANTI-GOD HUMANISM to CHRIST-CENTERED THEISM! TURN AROUND AMERICA!!! Do a 180 from SATAN TO CHRIST, from SIN TO RIGHTEOUSNESS, from IMMORALITY TO MORALITY, from ETHICAL RELATIVISM TO ETHICAL ABSOLUTISM, from EVOLUTIONISM TO CREATIONISM, from HELL TO HEAVEN!!!

The natural reaction man often has to God in adversity is Job 9:12,

“WHAT DO YOU THINK YOU ARE DOING?

“DAVID UTTERED NOT A WORD.”

That’s it:
-With Isaac we should take the wood!
-We should carry it on our own shoulders!
-We should resign ourselves to the knife 🔪!
-We must shut out mouths against shooting back at God!

“WOE TO THE HIM THAT STRIVETH WITH HIS MAKER!”…

THEN:
-David got up from the tear drenched dirt!
-He washed and anointed himself!
-He went to church and worshipped the Lord!
-Because God is God, He is perfect, He is loving, He is just! Amen!