Jesus – The First And The Last 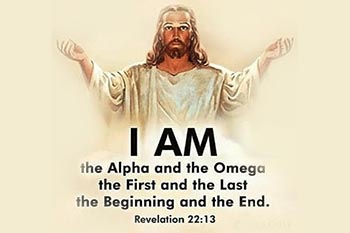 I never heard 👂of the Vice President of the United States of America until he was chosen by President Donald Trump to be his running mate. And to be totally honest, when he was made known, I was not impressed one way or another, because I had no point of reference.

Oh forgive me, I still have failed to mention his name – Vice President Mike Pence. At the time, he was the 50th Governor of the Hoosier state of Indiana. Even more telling is the fact that I am a Michigander, one of Indiana’s nearest neighbors. Still I confess complete ignorance!

Come to joyfully 😂 find out that our Vice President is a born-again Christian along with his dear wife Karen. She is known as the Second
Lady because she is married to the second-in-command. Barely visible and seldom seen, Karen with her husband are second in line.

But as we shall, the Pences are not alone, as we learn being the FIRST is exclusively reserved for someopne else.

The First Lady Melania Trump is married to the First-In-Comnand, President Donald Trump. All of that of course according to human nomenclature.

Nowhere in the Bible are human rulers know as “First.” There is no room whatsoever for HUMAN FIRSTS in God’s chain of command.

We read that the Lord Jesus Christ in Revelation 22:13 is that which He and He alone has the right to. These are His words:

“I am the ALPHA and the OMEGA, the BEGINNING and the END, the FIRST and the LAST.”

We do well to abide by the following and live accordingly:

“KING of kings and LORD of Lords.”

That is, He is the KING over all kings, and the LORD over all lords. That means He alone is FIRST-IN-COMMAND.

There cannot be TWO FIRSTS! Anymore than there be TWO GODS. In human elections, there can be TIES and RUN OFFS. Not in Heaven’s parlance! There are no TIES and no RE-VOTES. There are no close campaigns.

“Jesus Christ Has FIRST PLACE AND THERE ARE NO CLOSE SECONDS.”

***
So exclusively is JESUS FIRST, that the Bible tells us this in Daniel 2:21,

Kings that can be removed and put in place are FIRST in nothing, for they originate and terminate in Him, by Him, and through Him.

In Revelation 1:5 Jesus is prioritized in this way:

“He is the FIRSTBORN from the dead, the RULER of the kings of the earh.”

Once again, Jesus Christ is not A RULER, but THE RULER. Likewise there cannot be “A President” of The United States. There cannot be and there is not and never will be A RULER on the Throne of Heaven.

God in the flesh is THE SOVEREIGN over all the rulers on earth. There cannot be TWO SOVEREIGNS. The eternal truth is:

“There Is Not And Never Will Be A GAME OF THRONES.”

The real clincher in all of this is in Revelation 5. All of the praises in God’s eternal Heaven are reserved for THE LAMB UPON THE THRONE. No praises, not even a hint, are given to anyone or anything else. Not one single note!

The real clincher comes when all the creatures on earth, including those that are in the deepest oceans, rise up to give the LORD all the glory. That includes eagles and dolphins, jaguars and humming birds, sand cranes and elephants, all are praising the Lamb 🐑 Who is also the Lion. SOLO DEO GLORIA – GLORY TO GOD ALONE!

Well then, President Donald Trump is not the FIRST in command. Nor is His lovely wife Melania the FIRST LADY.

We along with the President and his wife must learn to get our priorities straight. FIRST THINGS FIRST! Or if you will:

“In All Things He Must Have The PREeminence. (Colossians 1:18)

“In all things He must have the PRE-eminence.”

HE IS NOT ONLY FIRST, HE IS LAST

We hear again Revelation 22:13 where Jesus Christ says to us:

“I am the ALPHA and the OMEGA,
I am the BEGINNING and the END,
I am the FIRST and the LAST.”

All of those claims made by our Lord at face value seem to be conundrums if not outright contradictions. How is it possible to be the FIRST as well as the LAST. What in the world is He talking about?

What is this, a riddle? Am I missing something here? What is Jesus, a split personality? Not to be irrevernt, but is Jesus two-faced here?

I am reminded what dad said to his daughter about her fiance. Dad ☺ observed, “Honey,” he said, ” I know a very good thing about Charlie!” “What is that Dad,” she replied. Dad said, ” Well honey, I know that Charlie is not TWO-FACED, because if he was TWO-FACED, he would not be wearing the one that he has on.” Ouch!

These very same reactions of calling Jesus a split personality or two-faced, could be made to the other two seeming irreconcilables as well!

(It should be noted parenthetically that these 3 ironies in Revelation 22:13 don’t come close in their meanings. Except to say they all sound like impossible couplets. We are dealing here with just one of these mysteries.)

***
The Lord Jesus in his earthly ministry had a lot to say about FIRST and LAST. It was not just something that occupied His teaching, but it was something that defined His life. He not only taught it, He lived it. The proof of the pudding is in the eating, and the solution to the mystery is in the living.

Remember these seemingly paradoxical words that Jesus spoke in Matthew 20:26,

There it is again! This obsessive refrain about FIRSTNESS and the LASTNESS changing places. And in both cases in Matthew 20:16, it appears that LASTNESS gets the better end of the exchange! If you will,

“LASTNESS ends up on TOP.”

We don’t like this at all, because by selfish nature we want to go right to the head of the line. But according to our Lord,

And in Jesus Christ we learn this:

“Firstness does not BRAG, it BLEEDS. ”

“Firstness does not STRUT, it SACRIFICES.”

” Firstness does not LIVE to DIE, it DIES to LIVE. ”

This stands opposed to all that is being taught in the HYPER FAITH – HEALTH and WEALTH mania that is a major last day false religion. It has reached pandemic proportions.

We recently visited a church and they had a visiting preacher that morning from Africa. The middle age speaker in somewhat broken English soon revealed his trump card that he threw down very quickly.

He stated that he was taken by a host pastor and his wife to a restaurant after the morning service in which he was the guest preacher.

When they arrived at the classy eatery, they saw a long line of people who were all waiting for tables to come available. It would be a long wait.

The African preacher then said that in faith he claimed a table so that they could avoid the wait and eat. Sure enough, the manager came to them and told them their table was ready as he led them past all the other waiting people. Then he exclaimed, “Hallelujah! That is what God does for His faith-filled people.”

“GOD DOES NOT WANT ANY OF HIS PEOPLE TO BE AT THE END OF THE LINE (LAST), BUT RATHER THAT THEY GO RIGHT TO THE FRONT (FIRST).”

He went on to give us other examples such as how God gave him a Mercedes-Benz and not a mere Chevrolet. Always the BEST, always the FIRST! As if Jesus lives by the world’s values.

Hear 👂 what this false prophet was saying,

“LASTNESS does not exist in the life of those who have enough FAITH.”

“Jesus is FIRST before us, because He became LAST for us.”

“Jesus FIRSTNESS does not BRAG, it BLEEDS.”

A surgeon by the name of Richard Selzer had to perform a facial operation for a young woman to remove a tumor.

During the operation unknown to him a small twig of a main nerve was clipped. Within moments after surgery and the anesthetic wore off, her mouth went into a strange contorted shape.

She asked the doctor if her mouth would always look so weird. He said yes, because that clipped nerve no longer controlled her mouth muscle. Her eyes filled with tears, and her head dropped down.

Her husband knelt down and said to her, “I like it, it’s kind of cute.” Then he twisted his mouth and lips into the shape of hers and their lips and mouths matched. Never did a kiss feel so good, and mean so much.

Jesus became twisted and grotesque with our sin, and kissed us with God’s grace. The cross is where HE put us FIRST, and Himself LAST. He died in our place, suffered our hell that we might have His Heaven.

A Prayer In The Dark Jesus – The Beginning And The End

The Everywhere God – No Tresspassing

Jesus – The Beginning And The End