A Prayer In The Dark 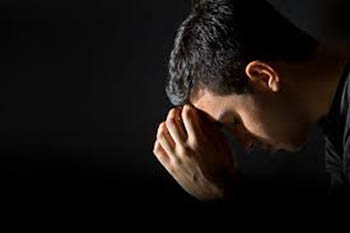 To quote the WORD of GOD,

“Out Of The Mouths Of Babes.”

God is never without a voice, whether it is a hairy-coated John the Baptist in the wilderness, or a young man-child praying in the darkness of an American classroom.

We don’t know the 👦 boy’s name, but spiritually and intellectually advanced beyond his years, his epoch PRAYER appeared on the internet. And as they say, it went viral.

Now I sit me down in school
Where praying is against the rule,
For this great nation under God,
Find mention of Him very odd.

If Scripture now the class recites,
It violates the 👎 Bill of Rights.
And anytime my head I bow,
Becomes a federal matter now.

Our hair can be purple, orange, green
That’s no offense, it’s a freedom scene.
The law’s specific, it’s precise,
Prayer said aloud is a serious vice.

For praying in a public hall,
I might offend someone with 👎 no faith at all.
In silence I must meditate,
God’s name’s prohibited by the state.

We’re allowed to cuss and dress 👍 like freaks,
And pierce our 👃noses, our tongues, and cheeks,
They’ve outlawed guns, but first the Bible,
To quote it here would make me liable.

We choose a pregnant Senior Queen,
And the “unwed daddy” our Senior👌 King,
But it’s inappropriate to teach right from wrong,
We’re taught such judgments don’t belong.

We can get our condoms and birth controls,
Study witchcraft, vampires, and totem poles,
But the Ten Commandments are not allowed,
No Word of God must reach this crowd.

It’s scary here I must confess,
When chaos reigns a school’s a mess,
So Lord this silent plea I make,
Should I be shot, my soul please take.

I don’t know what that does to you,
but it brings pain to my heart, and tears to my eyes.

I remember well the only things we had to fear 😱 at grade school was a pop quiz, or a vaccination. Even then, whether public or Christian, both schools started each day with prayer, Bible, and the Pledge Allegiance to the Flag.

We read first of all the most revelatory words of Romans 1:21-22,

“Because although they knew God, they did 👎 not glorify Him as God, 👎 nor were they thankful, but became futile in their thoughts, and their foolish hearts were DARKENED.”

“Because although they knew God.”

***
However because of sin in their lives, man 🚹 and woman 🚺 did not do two major things:

1. THEY DID NOT GLORIFY HIM AS GOD.
-That is, they refused to ascribe the GLORY of GOD-NESS to Him. MANKIND replaced God, and became gods unto themselves and give themselves all the glory.

2. THEY DID NOT THANK GOD.
-That is to say, for all the blessings of life, including life itself, they did not express gratitude to God. A 2nd major step downward into a futile and DARK mind.

3.THEY BECAME FUTILE THINKERS.
-As a result, all of their thoughts became more and more FUTILE. That is, they became EMPTY HEADS, empty of everything that eternally matters.

4.THEIR FOOLISH MINDS BECAME DARK.
-That’s the DARKNESS that our precious school boy 👦 feels so deeply in his insightful prayer to God. The light has gone out in every level of American public education.

REMEMBER in all of this the following TRUISM:

Right here in America in the 21st century, not so long ago, a 7th grade school teacher in California’s Byron Union School District, about 50 miles east of San Francisco, FORCED her students to BECOME MUSLIMS FOR THREE 🙌 WEEKS:
-They had to wear a 🌟 STAR and a CRESCENT 🌙
-They had to MEMORIZE MUSLIM PRAYERS.
-They had to MEMORIZE VERSES from the KORAN, and the 5 PILLARS of the MUSLIM FAITH.
-They had to FAST during lunch period as if it were RAMAHAN.
-They had to CHANT “ALLAH AKBAR” which means “ALLAH IS THE GREATEST.”
-They had to play a DICE GAME called “JIHAD” which was defined as the MUSLIM struggle against AGGRESSION.

***
How did that go over? It defies all explanation that such darkness and deception would descend upon an American Elementary School!

But yet to come is the ultimate case of indigestion and severe heartburn! Christian parents were outraged and filed a lawsuit in federal court against the school. Thomas Moore Law Center represented the parents.

What happened:
-The Judge dismissed the lawsuit.
-He called it a TYPICAL EDUCATIONAL PROGRAM.
-He said that the activities were not overtly religious.
-The 9th Circuit Court upheld the dismissal of the lawsuit.
-The ACLU registered no complaint against the school, and if the lawsuit had been upheld, the ACLU would have gone ballistic.

IMAGINE THIS FOR A MOMENT

An American public school teacher announcing to her grade school students:
-I’m assigning you the following for the next 3 weeks.
-All of us must wear CROSSES every day at home and at school everyday for 3 weeks.
-Every day I will hand out Christian Prayers that you must memorize and pray aloud.
-Each day we will be engaged in Christian practices of The Lord’s Supper and Baptism.
-We will practice certain types of fasting with understanding.
-Each of us will memorize The Apostles Creed and recite it each morning together
-Throughout the 3 weeks, we will chant together: “JESUS IS LORD.”
-And each day we will be reading passages from The Holy Bible and studying them together.

***
The best definition of the ACLU that I have ever found is Romans 1:22,

“Professing themselves to be WISE, they became FOOLS.”

A teacher in a public school that issues a three week study of Christian 💡concepts and practices would have parents and school boards and the ACLU all over him or her with lawsuits in a matter of minutes. The teacher would be fired, and apologies would be made to the whole world.

***
In closing we must remember who Paul is writing to in his Epistle to the Romans. Romans 1:7,

“To God’s beloved ones in Rome.”

“For Thy (Christ) sake we are killed all the day long,
we are accounted as sheep for the slaughter. ”

The DARKNESS was so heavy in Rome. It was literally NIGHT without DAY, and the Christians there, like the little boy, literally offered up their prayers in dense darkness.

To live into what the Christians in Rome and the Roman Empire are going through, try to live into for a moment what the Jewish people went through in World War II.

Of course this is not easy to do, but we need a point of reference so we can grasp 👊 what the Christians in Rome are facing in the 1st century.

The 🌎 world was at war. The bombs were falling every day. People were dying as a way of life. The Jewish people were being rounded up and herded in box cars like cattle never to be seen or heard again. 6 million of them were obliterated from the face of the earth.

***
The Christian’s 1st century Roman world was like that. All day long! An expression by Paul in Romans 8:36 which meant:

And so Paul reminds them all that they are, no matter what:

“Because God Loves Us, It Doesn’t Matter Who Hates Us.”

And this we must know:

“That Nothing Can Separate Us From The Love Of God, Neither Death Nor Life.”

Light On – Light Off Jesus – The First And The Last