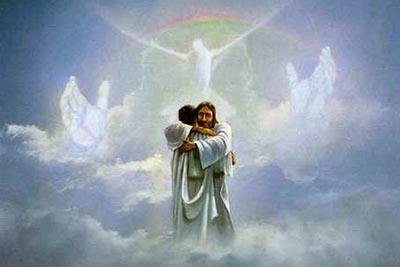 From the highest pinnacle of Heaven to the lowest pit of hell, there has never been so much perspiration and desperation in hell, and so much preparation and celebration in Heaven! All of the signs shout that there is very little time left. The Climaxer of the ages is getting ready to bring down the final curtain of history. Any day now! Any moment!

The unseen worlds in both cases are preparing for arrivals the likes of which have never been seen before! Both eternal destinations are abuzz with activity.

The one is expecting the BIG ROUND DOWN 😡 of unbelievers who rejected Jesus Christ, and lived for self. Thousands arrive shrieking every day, but nothing like the final BIGGEST ROUND DOWN that will arrive any second. Did you ever see the movie SHAWSHANK REDEMPTION, how when the new prisoners are bused in, the resident convicts sneer, jeer, and shout all sorts of hate filled obscenities at the freshmen initiates. Hell has to be like that!

The other is expecting a BIG ROUND UP of those who 😊 believed in Jesus Christ and lived for Him. Thousands arrive each day praising God with wonder in their eyes. But nothing like the BIGGEST FINAL ROUND UP that will arrive any second! I can only imagine the FESTIVAL OF THE FAITHFUL as they welcome the freshmen initiates into glory! Like soldiers coming home from war, oh the applause and salutes. Heaven has to be like that.

The HARVEST OF HELL’S worst, and THE HARVEST OF HEAVEN’S best! The depth of the one and the height of the other could never have been anticipated or imagined. DISGRACE AND GRACE have realized their ultimate.

Have you ever asked yourself, “I wonder, does Satan have JOY 😂 about anything, is there anything that He rejoices over?” If your answer is NO, you are ☑ wrong!

The answer to those questions is an UNEQUIVOCAL YES!!! It is a SICK JOY, a SINISTER GLEE, an UNHOLY DELIGHT! You might call it HELLISH HILARITY. The sneering grin on his face 😈 tells it all.

There is no doubt that Satan, his Wormwood demons, and sinners 🌚rejoice over sin and hell bound sinners!

Plus, misery loves company! There is a camaraderie among crooks. Demons like wolves travel in packs, Satan being the ALPHA MALE. They will gang-possess people and with FIENDISH DELIGHT cause them to cut themselves with knives. Better yet, kill themselves!

The Holy Spirit tells us about LOVE in I Corinthians 13:6,

The reason we are told not to REJOICE IN MORAL ROT is because:

“THERE IS A HYPNOTIC SPIRIT IN THE WORLD THAT REJOICES IN UNRIGHTEOUSNESS!”

It really does! That spirit is growing like a coronavirus. It wants us to celebrate and rejoice over moral bankruptcy. It is hell’s end time Mardi Gras 🎭!

It is Satanic, it is demonic, it is hellish, but it is DARK DELIGHT! It is all over the place, and it is in an end time crescendo. It has always been in this sin poisoned world 🌎, but never like today do the multitudes jump for joy over immoral filth!

The NAZI REGIME is a classic! No one ever thought that humanity could ever sink to the lowest of depravity! Third Reich assassin’s 🍸DRINKING AND TOASTING GLEEFULLY THE PAIN AND DEATH THEY WERE INFLICTING ON THOSE JEWISH ANIMALS! IT WAS A SAVAGE SATISFACTION!

Proverbs 2:14 talks about such men,

“WHO REJOICE TO DO EVIL!”

That was HITLER AND HIS FELLOW BARBARIANS! The more they shed blood, the greater their thirst for more blood! It was:

And did you notice that the Bible says,

“THEY REJOICE IN THE DOING OF EVIL.”

Their joy comes not from just thinking of evil, or from talking about evil, or from planning evil, but from the ACTUAL DOING OF EVIL!

The more they sinned, the 👍 greater the kick they get OUT OF SINNING! So then, the NAZIS OUTDID THEMSELVES IN SINNING! They could not help themselves in sinning to OUTDO THEIR PREVIOUS SINS! As if gassing the Jews was not enough, they tortured them by turning them into LABORATORY RATS, sickening, torturing, and defacing them! All in the name of medical science of course!

It is recorded in infamy! The Roman Colosseum and the BLOOD THIRST OF THE GLADIATORS.

Caesar Commodus gave the mob what they hungered and thirsted for – BLOOD-GUTS-DEATH. THEY developed a taste for slayings and beheadings and dismemberments! It became their daily menu, and for dessert they threw in man eating tigers for good measure! And I thought that I enjoy ITALIAN 🍕 FOOD! THE HOUSE OF COMMODUS HAD OTHER FARE, and it wasn’t OLIVE GARDEN!

They were called THE GAMES! LET THE GAMES BEGIN! It was a spectacle like none other! The people were OVERJOYED when it was GAME TIME!!! The deeper the river of blood, the greater the savagery of the slayings, THE LOUDER THE SHOUTS OF APPROVAL and the GREATER THE MOB LUST 😜 for more!

We have morally decayed into the same rot, with SPORT THAT CHOKES, BLOODIES, POUNDS OPPONENTS INTO GROTESQUE, DEFORMED MESSES. It is called SPORT which word was also above the entrance of the colosseum. The mob goes into frenzied madness!

Romans 1 talks about those with REPROBATE minds in Romans 1:32,

“NOT ONLY DO THEY FIND SIN TO BE A BLAST, BUT THEY FIND PLEASURE, THEY ENJOY, THEY GET A KICK OUT OF THOSE WHO SIN LIKE THEM AND WITH THEM!”

For the reprobate Romans, it was all GRAND GORE! The more jaded it became, the 👍 greater their JAUNDICE JOY 😆. AMERICA now descends into the ROMAN PIT OF REPROBATE PLEASURE!

Who knows what a generation will become? GAY PRIDE 👩👩 – 👨👨! They march in PERVERTED PARADE smiling their sick smiles of LGBT! The bystanders smile 😃 and applaud 🙏, as it all rises like a putrid, perverted stink to the nostrils of God!

Did someone say GAY? GAY of course means HAPPY – JOYFUL -LIGHTHEARTED! No, no, not HEAVYHEARTED OVER SIN, but LIGHTHEARTED, HOMOSEXUAL GAY JOYFULNESS! Get it?

“THEY DELIGHT IN THE FROWARDNESS OF THE WICKED.”

FROWARD MEANS:
-Perverse
-Twisted
-Perverted
-If you will – TWISTED DELIGHT – sounds like a dessert at your local TASTY TREATS!

There is a REJOICING IN THE WORLD OVER EVIL! They march for it, they flaunt it, they celebrate it, they unfurl flags for it! They even have AN ICON FOR IT – THE RAINBOW 🌈 – meaning God delights in it and will never judge it!

And any opposition to sin is now called INTOLERANCE, BIGOTRY, PHOBIA, AND RED NECK RETARDATION!

Oh so much fun at SATAN’S CARNIVAL OF CARNALITY! The choices are tantalizingly endless 🏇💰💉 🚬 💊 💋 🎲🍷👙!

A Russian Countess accepted Jesus Christ as her Lord and Savior, and was very vocal about her Lord! The Czar was most displeased! He had her thrown into prison with the rabble of society, and in the most miserable of conditions.

After 24 hours he ordered her to be brought into his presence. He said to her with a sardonic grin, “Well now, are you ready to renounce your silly faith and come back to the pleasures of the Court?” She answered him in this way,

“I HAVE KNOWN MORE JOY 👩 IN ONE DAY IN PRISON WITH JESUS, THAN I HAVE KNOWN IN A LIFETIME IN THE HOUSE OF THE CZAR!”

“YOU WILL SHOW ME THE PATH OF LIFE, IN YOUR PRESENCE IS FULLNESS OF JOY, AND AT YOUR RIGHT HAND ARE PLEASURES FOREVERMORE!”

Only true, full joy comes from fellowship with the Lord, and it is eternal! Real joy cannot be found anywhere or with anyone else! Not at the end of a needle, not at the mouth of a bottle, not in the arms of a woman, not in a number of the lotto, not in the arms of a slot machine, not in the Publishers Clearing House website! Only in a personal intimate relationship with Jesus Christ will true joy be yours and mine.

Fleeting, momentary, but for a minute or less! Then because the wages of sin is always death, what follows sin’s vaporizing pleasure is GUILT, SHAME, SADNESS, BROKENNESS, SCARS, REMORSE, DEMISE! Hear it:

FACT: “THERE IS NO JOY IN HELL, ONLY UNSPEAKABLE AGONY 😩.”

***
We have seen that the demon world rejoices in the rotten fruit of their labors – lost souls rotting in sin. Fallen angels rejoicing over fallen souls.

Heaven’s angels have ECSTATIC JOY! We read in Luke 15:10,

“LIKEWISE I SAY UNTO YOU, THERE IS JOY IN THE PRESENCE OF THE ANGELS OVER ONE SINNER THAT REPENTS.”

When one sinner down here turns from unrighteousness to righteousness, from Satan to Jesus, from hell to Heaven, from filth to purity, the ANGELS UP THERE have a HAPPY HOUR! In fact, it is contagious, for if you are in their presence, it so fills the heavenly atmosphere that you are immersed in CELESTIAL CELEBRATION!

There is so much in this, that I don’t know where to begin! WE HAVE BIRTHDAY 🎂 PARTIES DOWN HERE, ANGELS HAVE REBIRTHDAY PARTIES UP THERE!

1. Why would the ANGELS IN HEAVEN get all exited about man down here? After all, their kind really have nothing in common with mankind.

When you think about it, 👼 ANGELS are the only beings in Heaven who do not have a HUMAN DIMENSION in their DNA. All the redeemed and glorified saints will always be HUMAN. GOD Himself has a HUMAN NATURE – GOD BECAME MAN IN JESUS CHRIST THE GOD-MAN. There is no ANGEL-MAN, though they would take on the form of man to speak and deal with man. The HUMAN DNA has no kinship whatsoever with ANGEL DNA.

What is their joy over REPENTANT SINNERS all about? I rejoice over a HUMAN being healed of cancer far more than a dog 🐕 surviving cancer! Why are they so into us, so much so that when:

“A SINNER CONFESSES JESUS BEFORE MEN AS HIS LORD AND SAVIOR, JESUS CONFESSES THAT PERSON’S NAME BEFORE THE ANGELS OF GOD IN HEAVEN.” (Luke 12:8)

ALMOST as if we are the children of the ANGELIC HOSTS, and Jesus wants to announce to them the good news about their dear ones.

Fact is, by nature we have more in common with the UNHOLY ANGELS than we do with the HOLY ANGELS! Which is exactly why Jesus said to the HOLIER THAN THOU PHARISEES in John 8:44,

“YOU ARE OF YOUR FATHER THE DEVIL.”

You sons of devils you! And yet when sinners repent, the HEAVENLY HOSTS experience their HAPPIEST HOUR!

***
2. Secondly, it is even more amazing when you realize WHAT THE HEAVENLY HOSTS SEE 👀 BEFORE THEM AND AROUND THEM!

Jesus, talking about the humble childlike convert in Matthew 18:10 says,

“THEIR ANGELS DO ALWAYS BEHOLD THE FACE OF MY FATHER IN HEAVEN. ”

Try to drink this in, while the world drinks down their fruit of the vine in THE HAPPY HOUR.

Note that it says those ANGELS ALWAYS BEHOLD THE FACE OF GOD! Not sporadically but CONSTANTLY! They are fixated on the HEAVENLY FATHER’S FACE! Gives a whole new meaning to the song,

“CAN’T TAKE MY EYES OFF FROM YOU.”

END OF PART ONE