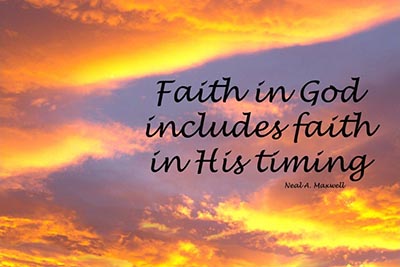 The teacher asked her Sunday School Class what they thought FAITH is:

All three of the youngsters are right! FAITH is all about GOD, not about us. If our hands are truly in God’s hand all the way, our hands could not be seen anyway!

It is ultimately not our grip on God’s hand, but His grip on ours. When we extend our hand✋to God by faith, He promises us,

And so He does! Jesus says that no one will snatch His own out of His hand ✋! Not one will be lost!

***
But you say, “I can’t see Him or His hand!”
That’s true, for we in our Christian walk are not SIGHT 👀 SEEING, but rather we are FAITH SEEING! FAITH HAS ITS OWN EYES 🌞 AND BY FAITH WE KNOW HE IS THERE!

“FAITH IS THE SUBMISSION OF OUR UNDERSTANDING TO WHAT GOD COMMANDS TO BELIEVE!”

Christianity is not first of all a BRAIN THING. It is first, last, and always a FAITH THING! This does not mean that BELIEVERS are BRAINLESS, like Hollywood constantly portrays them – red neck retards. It means that in faith, the HEART 💙 is always bigger than the HEAD 🎩. Trust in the Lord with all your heart, and don’t lean one bit on your own understanding!

EVEN IF HE KILLS ME

No matter what, we are commanded to TRUST HIM! Like Job says,

MY, MY, that is saying something! That takes it from the sublime to the rediculous! You mean you would put your total trust in a God Who would put a fatal hit on your very life? That is kind of extreme isn’t it Job? Not really, for true faith in God has no limits! EVEN IF HE KILLS 🚷 ME!!!

Fact is, Job had lost all of his children 👪 👪 👪 to a freak natural 💨 disaster! What could be worse than that! Knowing a parent’s heart, losing his own life would be small in comparison!

There are those days in our lives when everything comes up ROSES 🌹🌹🌹! Then it is easy to TRUST IN THE LORD! But God is not your hometown FLORIST! HE IS ALMIGHTY, ALL WISE, ALL LIVING GOD! Other days all that we get it seems are the thorns 📌📌📌! That is when it is hard to obey the command to TRUST HIM! But that is when FAITH’S TRUE METAL IS TESTED!

When that happens, man often will go into a RAGE 😖, or he will tie one on 🍺, or both. When the CORONA VIRUS HIT, toilet paper and booze disappeared from the shelves! Sales of 3 liter boxes of wine🍷nationwide went up 54%, and 24-beer 🍻packs went up by 25%. Vodka🍸 sales in Russia went out of sight.

Things were coming up flowers 💐 across the land, as President Trump reminded us daily that under his Presidency, the nation was experiencing the best economy the world 🌎 has ever seen!

“THEY PUT AWAY FROM THEMSELVES THOUGHTS OF BAD TIMES, LYING UPON BEDS OF IVORY, AND STRETCHING THEMSELVES UPON THEIR COUCHES.”

And in Zechariah 1:11, we hear the ANGEL OF GOD giving an account of the condition of a pagan world ,

“BEHOLD THE WHOLE EARTH 🌎 SITTETH STILL, AND AT REST.”

Free from thoughts of care or worry, all they really thought about was how to dress for the next party. And to make sure that when they returned home hung over, they could sleep on their MY PILLOW GIZA DREAM SHEETS!

And then it hit worldwide like a sledge 🔨hammer! In a matter of weeks, over 37,000 Americans were dead, and over 134,000 were dead across the earth, and still counting! Bible sales went out of sight, as there are no ATHEISTS IN CORONA VIRUS FOXHOLES!

Of all the MUSTS OF THE CHRISTIAN LIFE, at the TOP OF THE LIST would be for sure these three:

“FAITH IS THE SUBMISSION OF OUR UNDERSTANDING TO WHAT GOD COMMANDS US TO BELIEVE.”

“OBEDIENCE IS THE SUBMISSION OF OUR WILL TO WHAT GOD COMMANDS 📜US TO DO.”

FAITH and OBEDIENCE, like love 💓 and marriage 💑, they go together. Romans 16:26 teaches us about:

“THE OBEDIENCE OF FAITH.”

That is exactly why:

“THOSE WHO OBEY GOD ARE CALLED FAITHFUL.”

“THOSE WHO DISOBEY GOD ARE CALLED UNFAITHFUL.”

Oh those final and eternal words of commendation from the lips of the Savior to His faithful ones:

“WELL DONE GOOD AND FAITHFUL SERVANT, ENTER THOU INTO THE JOY 😌 OF THY LORD. ”

***
OBEDIENCE – THE HALLMARK OF CREATION

Has it ever gripped you how all of CREATION OBEYS IT’S MAKER? It is stunning when you first recognize it! Breathtaking!

“THE WATERS STOOD UPON THE MOUNTAINS, BUT AT THY REBUKE THEY FLED, AND AT THE VOICE OF THY THUNDER THEY HASTED AWAY.”

How do waters STAND UP anyway? I know that they rise up, but STAND UP THEY DID! Nothing but ODEDIENCE – TOTAL INSTANT ODEDIENCE in the inanimate creation! The whole EARLESS creation heard God better than TWO-EARED 👂👂MEN!

Whatever you hear in those verses, I am reminded of how the waters of the Red Sea at God’s command STOOD UP like mountains on either side. Then again at His thunderous voice they ran back down 🌊 and drowned the enemies of Israel! INSTANT COMPLIANCE IN UNHEARD OF PROPORTIONS FROM A MOUNTAIN RANGE 🗻 TO A FLOOD PLAIN!

OBEDIENCE to God is the HALLMARK OF THE NATURAL WORLD!

2. Please read Daniel 6 as soon as you can. Remember, that’s the story you wanted your daddy or mommy to read to you as a child. You couldn’t get enough of it, perhaps one of your all time favorites!

You know as well as I do that the natural inclination of LIONS is to eat HUMANS! We are at the top of their preferred cuisine! And of course, overall they are not picky! They will eat anything that does not eat them first.

The law of the Medo-Persian Empire was that no one was allowed to pray to a god! The only one they could petition was KING 👑 DARIUS! It was the law, and if you broke it by talking to your god, in the LIONS DEN you went! They didn’t shoot you, or hang you, or crucify you. They fed you to the lions, an interesting twist on capital punishment.

Did you ever hear someone jokingly say, “IT’S THE LAW OF THE MEDES AND PERSIANS!” It was no joke! Daniel mind you prayed 🙏 three times a day to Jehovah God in front of an open window 🔲. He would have done the same thing in America’s public schools no doubt! It was the obedience of faith in action, which transcends obedience to any and every law of man!

“MY GOD SENT HIS ANGEL, AND SHUT THE MOUTHS OF THE LIONS, THAT THEY DID NOT HURT ME!”

Guess who the real LION KING 👑 IS! It wasn’t the ANGEL of God, but it was the GOD OF THE ANGEL! Those lions obeyed their MAKER over every natural instinct and ravenous appetite in them! When God speaks, lions listen! When God commands, lions conform! It is the HALLMARK OF THE NATURAL WORLD!

The Bible tells us that in Heaven THE LION SHALL LAY DOWN WITH THE LAMB. Here, THE LIONS LAID 💤 DOWN WITH THE PRAYING PROPHET. They didn’t get their LIONS SHARE that day!

The next day they ate to their hearts content! The main course was SUB-RULER STEAKS 🍖served with MASHED WIVES 🍚! For dessert, the lions ate their kids🍨. That’s what happened when King Darius became disillusioned with his vice-lords! He literally fed them to the lions!

***
We can see this from Scripture over and over again! It happens every day all around us! We just don’t recognize it! As when RAVENS BECAME ELIJAH’S PERSONAL CATERERS!

They are scavengers of the first order, except when God commands them to bring food to one of His chosen servants. They become as obedient as heal hounds 🐕!

And so it is that every dimension of the natural world executes the commands of their MASTER with readiness and eagerness!

God can tame LION KING or CROWN VIRUS! Nothing is beyond HIS COMMAND AND CONTROL! SEEN OR UNSEEN! HUGE OR TINY! OUR GOD REIGNS!!!

A totally different hallmark – THE HALLMARK OF DISOBEDIENCE! If you will,

“THE HALLMARK OF SELF-WILL!”

“WE ALL LIKE SHEEP 🐑🐑🐑 HAVE GONE ASTRAY, WE HAVE TURNED EVERYONE TO HIS OWN WAY…”

There you have it! Frank Sinatra’s “I DID IT MY WAY!” That is the theme song of disobedient mankind! HIS OWN WAY MEANS DISOBEDIENT TO GOD’S WAY!

The FIERCELY STRONG 💪 WILL OF MAN 🚹 is the last faculty TO SUBMIT TO GOD IN OBEDIENCE!

“MAN’S SELF-WILL IS BY HUMAN NATURE THE COMMANDER AND LORD OF HIS SOUL!”

Not the LORD GOD, but the LORD WILL! Everything that a man DOES or DESIRES by human nature is entirely at the beck and call 🔊 of his own will. I know that is pretty blunt, but these are the facts:

Just like ole ADAM – his CONTRARY MIND made the forbidden fruit look better than all other fruit – FALSE COUNCIL!

And just like ole ADAM – his CONTRARY WILL made him put forth his hand and pick it – FALSE CONSENT!

PRESIDENT ABRAHAM LINCOLN during the CIVIL WAR was in a prayer meeting with several area pastors.

Suddenly one of the pastors spoke up and said,

“LET US PRAY THAT THE LORD WILL BE ON OUR SIDE!”

To which the President responded,

“RATHER LET US PRAY THAT WE WILL BE ON THE LORD’S SIDE!”

Exactly! God is loudly calling the whole world 🌎 to FAITH AND OBEDIENCE! HEAR 👂 IT,

“THAT JESUS CHRIST BE THE SOLE OBJECT OF OUR TRUST, AND THE SOLE RECIPIENT OF OUR OBEDIENCE!”

IT COULD WELL BE HIS LAST CALL! It has often struck me that in the days of Noah, which history’s last days will be like, GOD SAVED MORE OF THE NATURAL WORLD THAN HE DID OF THE HUMAN WORLD! In short, He saved more animals than humans. Perhaps because He saw more trust and obedience there than in men? Frankly, the ARK was labored over and built primarily for the ANIMAL PLANET and not the HUMAN PLANET. I wonder if there will be more lions and lambs in Heaven than men?! Amen