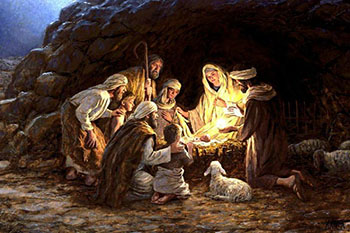 My childhood Christmases I can say we’re nothing short of magical! It was a WINTER WONDERLAND in Holland, Michigan. Still is! Christmas and snow were synonyms. We not only dreamed of a White Christmas, we lived it each year. Michigan was way ahead of Ervin Berlin’s WHITE CHRISTMAS.

Oh yes, there was the real Christmas tree 🌳 in the living room, all decked out and beautifully lit. There were the stockings hung over the fireplace. Mom’s Christmas knick-knacks were scattered here and there, and the house would be fragrant with scented Christmas candles. We always hoped that it all would never end.

We had evergreen bushes outdoors right by our front windows. Each year my father would string powder blue lights on those bushes. And when the snow fell on those lights, the beauty of those snow adorned lights transformed our annual Christmas into a translucent powder blue-sparkling white fairytale land. What a sight! It truly was a dream land come true.

And of course, downtown Holland had Centennial Park right in the center of it all. And there in the center of the park was the beautiful annual Christmas MANGER SCENE. There were Mary and Joseph, the Wise Men, and the baby Jesus in the manger. There were the 👼 angels standing around singing Christmas carols to baby Jesus. Light, sound, it actually came alive. It was a long awaited holy tradition each year.

For that matter, throughout Holland were manger scenes in the front yards of many of our fellow Hollanders. My dear Lord, I can feel it in my soul in the telling of it!

FROM MANGER😇 TO MADNESS😠

Now playing – THE DANGER OF THE
MANGER. How could this supremely innocent and peaceful scene become a war zone? How could a nursery be degraded and deformed into a nuclear silo? Unimaginable! Unthinkable! Inconceivable!

Am I exaggerating? I wish I was! But I am not! The furor against nativity scenes being displayed on public property in America has become downright hostile and pandemic. Along with HAPPY HOLIDAY now replacing MERRY CHRISTMAS, there is a growing hostility in the land with the goal being to de-Christ Christmas, as well as to de-God America.

“HE SHALL BE A SIGN SPOKEN AGAINST…..THAT THE THOUGHTS OF MANY HEARTS MAY BE REVEALED?”

From a country stable to a court room! That’s now where the manger leads. As the anti-Christ powers of Hell through left wing activist judges have unleashed their wrath against the most peaceful and holy and gentle scene on the face of the earth:

THE ABSURDITY OF THE MADNESS

Less we lose sight of what really happened! The☝one thing that grips me again and again is the joining of the simple and the supernatural. One minute I am part of it, and the next minute I can only stand in wonder from afar.

GOD THE SON left Heaven 9 months before Christmas. Yes, the Son of God took a maternity leave from the Throne of Heaven, and became incarnate in the womb of an obscure Jewish peasant girl. In so doing, He joined Himself to a despised race, which in turn would despise Him.

In the fullness of time, in a remote village in a forgotten province, God the Son was born the Son of man from the womb of a virgin named Mary.

From there, He would set His face like a flint to Jerusalem and a hill called GOLGATHA where He would die for the sins of the world.

But there in a stable, He was wrapped in rags and was gently placed in a feeding trough. No crib for this little boy named JESUS. Here is the Creator of the universe born in a borrowed barn.

No wonder we all have puzzled looks on our faces as we try in vain to sort it all out.

Meanwhile, fast forward to the modern manger on main street. The nay-sayers tell us that we may not use PUBLIC PROPERTY FOR RELIGIOUS PURPOSES.

No, no, this is not public property! There in the feeding trough lies One of Whom Psalm 24:1 says,

“THE EARTH IS THE LORD’S, AND THE FULLNESS THEREOF, AND ALL THEY THAT DWELL THEREIN.”

I can hear Jesus say, “I CREATED THIS PROPERTY, IT IS MINE, AND BY THE WAY, IF YOU WANT SOME PROPERTY ON JUPITER, I CAN ARRANGE THAT FOR YOU TOO.”

He Owns all of it, all of this earthly stuff is His, and here comes the ACLU strutting its stuff. What a tragic joke! OH WILL THEY LEARN THE HARD WAY SOON!

THE GOD BABY 🚼 IS BORN

Now we are getting to the heart ❤ of it all. I mean, who in the world would boycott a baby? Everyone in their right mind loves a baby. After all, the birth of a baby 🚼 is one of the happiest days in our lives. We even hand out cigars to total strangers when a baby is born. Here have one on me! Relative strangers offer their congratulations and rejoice with us.

Certainly a nursery, no matter how primitive it might be, is no place for skullduggery. You would have to be some sort of a monster to march in protest against the birth memorial of Joseph’s and Mary’s baby boy.

***
But this is not first of all the carpenter’s son, this is God’s Only Begotten Son in the flesh. And therein is the 👎 bone of contention.The parade of protest begins here.

You see, the truth is, if baby 🚼 Jesus was not God incarnate, there would be no opposition to the manger memorial. If that little bundle was not DIVINE, there would be nothing disconcerting or discomforting about the manger scene. Though indifferent, the general reaction would be benign.

“THEREFORE THE LORD HIMSELF SHALL GIVE YOU A SIGN, A VIRGIN SHALL CONCEIVE, AND SHALL BEAR A SON, AND SHALL CALL HIS NAME IMMANUEL (GOD WITH US).”

“UNTO UNTO US A CHILD IS BORN, AND UNTO US A SON IS GIVEN, AND THE GOVERNMENT SHALL BE UPON HIS SHOULDER, AND HIS NAME SHALL BE CALLED WONDERFUL, COUNSELLOR, THE MIGHTY GOD, THE EVERLASTING FATHER, THE PRINCE OF PEACE.”

GOD! MIGHTY GOD! The heat of hostility against the baby and His memorial begins to soar, because now sinful man, perish the thought, MUST ONE DAY GIVE ACCOUNT TO THIS BABY GOD KING.

That is the LYNCHPIN OF THE MADNESS SURROUNDING THE MODERN MANGER. Man 🚹, sinful rebellious man, wants to live his own life and do his own thing, let alone having to give account of his life TO A CHILD GOD-KING.

“MAN REJECTS HIM AS SAVIOR, SIMPLY BECAUSE THEY REFUSE TO BOW BEFORE HIM AS LORD AND KING.”

The MADNESS 😠 AGAINST THE MANGER ultimately has little to do with separation of church and state. That is just a smokescreen. MODERN MANGER MADNESS 😠 has nothing to do with political correctness. That is nothing but word games being used to cover up insurrection against the King 👑 Of kings and Lord of lords.

THE MANGER MADNESS is at heart A GOD THING, nothing more. nothing
less. If the little kid was just a kid, they would host a baby shower. But instead, they crucify unto themselves again and again the Lord of Glory. AMEN!