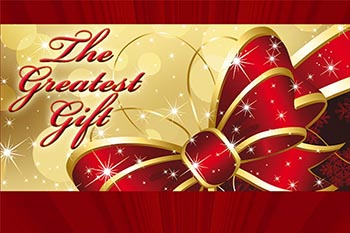 Believe it or not, it is here again. Already! From now until December 25, we shall hear the commercial din, and see the material montage of another Christmas in the USA.

It will be my 78th. Things haven’t changed that much! Christmas deja vu! Been there, done that. How about you?

BLACK FRIDAY has already kicked off the buying binge, as a robust economy promises to make Santa Claus 🎅 busier than ever this year. More jobs available than ever before, or so we are told. Very, very low unemployment makes for more spending potential which the merchants are anticipating with glee.

So you better not shout, you better not cry, and I’m telling you why, Santa Claus 🎅 is coming to town. I mean, he could be coming loaded with a bonanza of gifts like never before. So don’t miss out! Try to be good little boys 👦 and 👧 girls. Okay?

THERE IS A HUGE PROBLEM

Only one great big problem, and that is that CHRISTMAS GIVING really has nothing to do with Toys R Us. It never has and never will. Nothing against toys or kids! I am at heart for both, particularly the latter. It is just that they are not in the same league with true CHRISTMAS GIVING!

Yes I know that certain Wise Men did bring gifts to the 🚼 baby Jesus – gold, frankensence, and myrrh. Not exactly Toys For Tots. But kids around the world 🌎 will cash in on the Wise Guys again this Christmas. Bless their little toy grabbing hearts ❤.

Nor does Christmas have anything to do with the latest high tech stuff at Best Buy. Nothing wears out in that world, it just dies an annual death. OUTTECHED! Make room for the latest gadgets. We have gone now from BLACK FRIDAY to CYBER MONDAY. Even though we still have a very unsmart cell ☎ phone.

I have been to enough Christmas family gatherings when the grandkids were all buried in smart phones texting who knows!? HIGH TECH – LOW TOUCH CHRISTMAS. Somehow we have lost the intimacy of the manger feel.

Nor does Christmas have anything to with bringing a bottle of chardonnay to the Christmas party. Cow’s or 🐐goat’s milk maybe. There was not a drop of alcohol 🍸 in the manger. No one toasted the baby 🚼 Jesus. Sorry, so much for CHEERS! There were no designated drivers needed that first Christmas.

Okay! Go ahead and get it out of your system. Just call me SCROOGE 😠, if it will make you feel better! 😄 There now, was that a relief?

THE GIFT 🎁 OF CHRISTMAS

If any Scripture defines Christmas Giving as no other, it is John 3:16. There is no greater and on point Scripture in all the Word of God. We know it so well, and I fear, we know it too well:

“For God So Loved The World, That He gave His Only Begotten Son, That Whosoever Believes In Him, SHOULD NOT PERISH BUT HAVE EVERLASTING LIFE.”

There you have it:

“CHRISTMAS GIVING IS THE MOST PRECIOUS GIFT FOR THE WORST RECEIVERS IN THE WORLD.”

No matter how you try to say it, it somehow falls short of the true reality. What is needed is an illustration that says it better than all of the words in the whole world, for Christmas is in fact from another world.

SHE GAVE HER LIFE

The reality of Christmas could not be made up! There is no imagination in the world capable of coming up with something like the real Christmas. It staggers the mind:

“GIVING YOUR ONLY SON TO GO TO HELL FOR A WORLD THAT HATES YOU LIKE HELL.”

***
I share with you a true story that gripped my heart in a way that very few stories do! I am at heart ❤ a very emotional guy, and what follows pulled every chord and rang every bell in my heart.

A Jewish woman became the recipient of a gift that changed her life forever. There is no way to measure a LIFE FOR A LIFE GIFT. There is a price tag attached to most every Christmas gift that will be given, even though it is hopefully removed. But then there are those rare gifts that are priceless, and for which there is no tag big enough.

Let us first repeat the words of Jesus at the outset in Matthew 5:16,

“LET YOUR LIGHT SO SHINE BEFORE MEN, THAT THEY MAY SEE YOUR GOOD WORKS, AND GLORIFY YOUR FATHER WHICH IS IN HEAVEN.”

If you will, let people see 👀 the light of God’s love in your life’s good works, so that they will embrace your God as their God and live for His glory forever.

Now then, the Jewish woman! As this story begins, she is fleeing from the German Gestapo as the Germans were ravaging and pillaging France in World War II. Here we see real CARAVANS of French Jews and French Peasants fleeing from their homes to save their lives.

People don’t realize how France was overrun by the Third Reich. The French Government vacated Paris so that the Germans would not BLITZKRIEG all the beautiful architecture like they had done to Eastern Europe. The citizenry followed suit, and fled to parts unknown.

I can see clearly as conveyed on History Channel, the miles long French people caravans running for their lives. As a Jewish father said to his son as they were fleeing in the French countryside, “If your parents are captured, promise me that you will run and never stop running.

A Jewish father ‘s last words to his son,

“PROMISE ME THAT YOU WILL KEEP ON RUNNING.”

I believe that there is a film that deals with this very thing. And I believe the title of the film is something like:

It was that desperation that had run over France. The dear Hebrew woman 🚺 on the run from the hit squad Gestapo, was very close to being caught. She could literally feel the Germans breathing down her neck. Predator and Prey! It all became a way of life and death!

Of course the entire German army was deeply infected with the POISON of anti-semitism. It was Satan’s spell cast over the German people through his beast Adolph Hitler. It was necessary in order to achieve the SUPER RACE!

The Jews of Europe were the NIGGERS OF AMERICA! THE GESTAPO were the KKK of America. Get the picture?

She wasn’t only being pursued by the Gestapo, but by hordes of demons that literally possessed the nation of Germany. It all was totally DEMONIC.

Remember that entire nations can be under demonic control. Recall that Gabriel, the angel of God, appearing to Daniel as a man, informed him that the PRINCE OF PERSIA tried to stop him from bringing God’s word to Daniel. The PRINCE OF PERSIA was no less than a demon spirit that ruled over Persia. (Daniel 10).

These demons loved the taste of Jewish blood. They drank it by the millions of gallons. They got drunk on Jewish blood, and the more they drank, the thirstier they became.

The Jewish woman in her flight from the Gestapo, came to the home of a French Huguenot. The Huguenots were French Protestant Christians who from the PROTESTANT REFORMATION grew into millions.

The tired Jewish woman said to her, “It is no use, they will find me anyway. They are too close behind me.” The Christian woman said, “Yes, they will find someone here, but it is time for you to leave. Go now with these people to safety — I WILL TAKE YOUR IDENTIFICATION AND WAIT HERE.”

The Jewish woman then understood the plan of safety! The Gestapo would come and think that the Christian widow was the fleeing Jew. The Christian woman wanted to take her place, so that she could escape to freedom!

We are reminded of the words of Paul in II Corinthians 5:21,

“FOR HE MADE HIM WHO KNEW NO SIN, TO BE MADE SIN FOR US,
THAT WE MIGHT BE MADE THE RIGHTEOUSNESS OF GOD IN HIM.”

“JESUS WAS BORN TO BECOME OUR SIN, THAT WE COULD BE BORN AGAIN TO BECOME HIS RIGHTEOUSNESS ”

“JESUS WAS BORN TO GO TO OUR HELL, SO THAT WE MIGHT BE BORN AGAIN TO GO TO HIS HEAVEN.”

***
The Jewish woman later in her rescued life related, “I asked the Christian woman before I left her, ‘Why are you doing this?'” She then said to me,

“IT’S THE LEAST I CAN DO; CHRIST HAS ALREADY DONE THAT FOR ME, AND MUCH MORE ”

The Christian widow was caught and arrested and imprisoned in the Jewish lady’s place, allowing time for her to escape.

The Christian widow within six months died in a concentration camp where the Germans committed mass murder against the Jewish people.

Not long after, the Hebrew woman accepted Jesus Christ as her Lord and Savior! She would meet the Christian widow woman in Heaven one day. How precious their reunion as together they gaze on Him Who took their place!