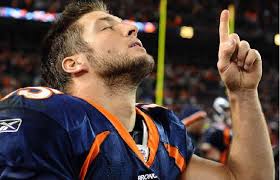 I was saddened today when I heard that Tim Tebow had bowed to the pressure of political correctness and cultural decay in canceling his speaking engagement at First Baptist Dallas.

It grieves me so deeply when young Christians, flush with fame and fortune and standing in the limelight, buckle to this kind of pressure. The list is a mile long and sadly Tim Tebow is not the first and certainly won’t be the last.

What did he ever have that Christ didn’t give him? What does he expect to gain by withdrawing? Did non-Christians ever love him? Will he play football any better by playing the Politically Correct Card? He may have maintained his marketability, but he also (intentionally or not) sent a message that he agreed with the media about FBC Dallas. This is being perceived by the secular media as a “Wise PR” move. I’m sorry but there is a thin line between “protecting your platform” and “affirming falsehood.”

The secular media has been mercilessly attacking FBC Dallas with articles that criticized not just the church’s pastor, Dr. Robert Jeffress, but the church’s views: that Jesus is the only way of salvation, the certainty of eternal judgment for those who die outside of Christ, and the definition of marriage as the union of one man and one woman. These teachings are not the innovation of Dr. Jeffress but are the established consensus of the Christian Church over its entire 2,000 year history.

It’s an amazing thing to me that just because you say that faith in Christ is the only way to be saved and go to heaven, and that sex should be between a man and a woman in a marriage relationship, somehow that’s been misconstrued to be hate speech. The reason for this is not because the Word of God has changed, rather culture has changed. These once accepted truths for 2000 years of history have now suddenly become hate speech.

“I am the way, the truth, and the life. No one comes to the Father

CALLING ALL MEN OF GOD

Please don’t misunderstand me, Christianity in America does not rise or fall on whether or not Tim Tebow speaks at First Baptist Church of Dallas. But I think that his failure as a Christian role model and public “banner carrier” for Christianity, if you will, exposes a far bigger need in our churches, the urgency for men to lead and lead now!

Speaking to the men reading this, I realize that you are continually pressed to lead. Would you care to know why? It is because men are expected and should be expected to lead. We should lead ourselves properly, lead our families, lead our businesses, lead our communities, and yes, even lead our churches. America is suffering horribly from a lack of leadership today in each of these areas and more.

Never has there been a greater need for young boys, younger men, middle-age men, and even men in their senior years to be under the Word of God together.

Men and families are in trouble. Let’s do not kid ourselves! Many men have time for all kinds of things except for their spiritual growth. Why can 75,000 men fill a football stadium regardless of the weather and these same men not even fill a church building to grow spiritually? That is a serious question that not one of us should mock! Hundreds of our men pour thousands of dollars into teaching their boys how to shoot basketballs, play baseball, or throw a football, but do we spend time and money to have our boys join us for a spiritual encounter with God?

THE CALL TO SACRIFICE

“Husbands, love your wives, as Christ loved the church and

gave himself up for her.”

Risk it. Give yourselves up for the benefit of another.

“Do not rebuke an older man but encourage him as you would a father,

women as sisters, in all purity.”

Men, we need to face the facts and change the present reality in 2013. Let’s open our Bibles! Don’t be afraid to be a man. Our churches need you. Our world needs you. Be who you were created to be, who God says you are.

Men of God, stand up and be counted. Our families and our churches are counting on us.