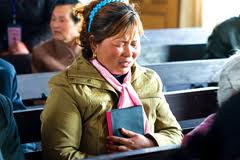 In the parable of the “Pearl of Great Price,” Jesus told of a man who sold everything to purchase something highly valuable. In China, a woman named Yip and her family also found something valuable – God’s Word.

To allow Yip to study the Bible and to teach others, her family sold their most valuable possession, their water buffalo. This was no small decision. Yip and family are farmers, and their water buffalo was the “tractor” that helped plow their fields. The buffalo’s milk also helped put food on the family’s table. But they were willing to sell this valuable animal so Yip could have something even greater – an expanded knowledge of God’s Word.

A sacrifice this large is nothing new for the people in Yip’s community in China. They live in a mountainous area without roads or transportation. To get to church, most of the people start out on Saturday, making the six mile trek on foot over the mountains. They worship all day Sunday and walk back home on Monday.

Since the church does not have a pastor, the congregation relies on Yip to instruct them in God’s Word. Through our partnership with Amity Printing Press in Nanjing, American Bible Society is helping to ensure that people like Yip continue to hear the Good News.*

HEAVEN COMES TO HODABALO IN TOGO

I was born in Pya, in the northern part of Togo, in 1991,” says Gnassingbe Hodabalo. “I was part of a group of robbers who operated in Kara and its surroundings. The first time I was imprisoned was in 2009, due to the theft of a sewing machine.”

“For that, I spend two months in jail before my father intervened to get me out of there. It is here in prison that friends introduced me to motorcycle theft which is much more profitable. I got into this game right after I came out of prison and was stealing motorcycles to resell them in Benin and in other cities of Togo. I was arrested again and imprisoned for the second time. My parents said that an evil spirit was behind my attitudes, pushing me to steal.”

“My parents spent a lot of money, going to consult fetish priests to get me out of this life, but it did not work. Other offenses have led me to prison again for the third time, and it is here now that I met Jesus Christ. Yesterday, I had friends who taught me how to steal and commit crimes. But now I have friends who teach me the way that leads to God, and with their help, I discovered today that I was in an abyss.

“In the prison here, I also get involved in the activities of sewing during my free time. Now, I do my best to participate in the listening sessions of Faith Comes By Hearing, and I also like the prayer sessions, hoping that this time, when I am released from prison, I will not come back again.*

(Whether we know it or not, Jesus must bring each of us from the abyss of Hell to the courts of Heaven. It is the journey described in Pilgrim’s Progress by John Milton.)

When Tommy first came to our Veterans Affairs facility to wait for his heart transplant, he told me that he wasn’t an overly spiritual person, and stated that he’d enjoy casually talking to me. A relationship of trust and caring support developed.

Three weeks after receiving his heart transplant, Tommy stated, “We need to talk.” Tommy began by saying, “I came here to get a new heart, but I do not think that my heart transplant is complete yet. Something tells me that you are a person who might help me make it complete.”

Tommy continued tell me that he really wanted a new spiritual heart. He stated, “I want a heart that is healed of all the really awful things that I have been carrying around in this old heart of mine. I just got to have some peace of mind and heart.”

The day before Tommy breathed his last breath in this earth, I spent several hours with him. He was very, very weak. Some of his last words to me were, “Thank you. I am so glad that I came here. I got a new heart really. I got a new healthy heart. If I had not come here, I would have died anyway. However, if I had not met you, I would have died with an ugly, mean-spirited heart that was tightly packed with horrific memories.”*

(This story was excerpted from the introduction to “When You Feel Overwhelmed With Guilt” by Juliana Lesher. It is an awesome thought that though Tommy’s body rejected the new physical heart, he did not reject the new spiritual heart in Christ. Once a person receives Christ’s new heart of love, joy, and peace, he never wants to be without it again. Tommy’s new spiritual heart will beat forever with Jesus in Heaven.)

American Bible Society has provided Bible resources for the show’s mobile and Facebook apps, which has now been downloaded by more than 125,000 people.

“Faith is a huge part of my life,” Foxworthy says, which may be one of the reasons GSN asked him to host the show. Foxworthy also sees “American Bible Challenge” as a potential way for viewers to engage with God’s Word in a non-threatening way.

Many people watching the show, Foxworthy anticipates, will have at least some familiarity with the Bible. But it’s Foxworthy’s hope that the show also reaches those who are not engaged with the Scriptures. He states, “I think that there are probably people who grew up in the faith that walked away from it, who will hopefully watch this, and they’re like, ‘Oh yeah, I know that story,’ or, ‘I know the message of that parable.’ It might be an opening to draw them back.”

“American Bible Challenge,” like faith, is all about sharing God’s blessings. “When it finally sinks in,” Foxworthy says, the way God loves us, and even while we were still in our sins Christ died for us, when you finally get that – and that it’s not based on your performance – I don’t think that you can do anything but turn around and bless somebody else.”

Foxworthy acknowledges that he might take some flak for hosting “American Bible Challenge.” “But, we’re told to go and spread the Gospel,” he says, “If you’re taking it to places it hasn’t been before, how can that be bad? It’s all about the love of the Father,” Foxworthy concludes, “The Bible is a love story. It’s the coolest love story you’ve ever heard.”*

(The Word of God is living and active, more powerful than any two-edged sword. It can do what no man can do, and go where no man can go. I am not ashamed of the Gospel, for it is the power of God unto salvation, even on a game show.”)

Bichitrananda Rout, known to his friends as Nanda, has been redeemed through the power of the Gospel. Nanda hails from Orissa, in Eastern India, an area known for violence against Christians. “Nanda’s family was a very strong traditional Hindu family,” he says, and he grew up performing pooja, chanting slokas and sacrificing animals.

“I was stubborn, arrogant and proud,” says Nanda. He was seeking a peace that eluded him. He even resorted to black magic, but black magic did not bring Nanda peace.

Then, in 2002, Nanda’s wife became interested in learning about Christianity through the outreach of a local evangelist. Many Christians came to Nanda’s home, and prayed for him and his wife. Through their prayers, Nanda came to know Jesus Christ, despite opposition from his relatives. Nanda says, “I accepted Jesus Christ as my personal Savior.“

Nanda now works for the Bible Society in India, helping to distribute the message of God’s unfailing love to millions of people like himself who so desperately need to hear the Good News of the Gospel. “I now interact with many believers,” says Nanda, “it is a joy to reach people with God’s Word.”*

(The Holy Spirit helped Nanda cut through the pantheon of Hindu gods and the demonic darkness of black magic to the only true God – the Lord Jesus Christ. The faithful prayers of believers and the Word of God powerfully dispensed shed light into a mind that had been darkened by idolatry and the evil deceptions of Hell.)

FATIMA – FROM RAPE TO RESTORATION

Some people need to discover Job before they are ready to trust Jesus. Fatima is a young woman in Walikale, Democratic Republic of the Congo. Fatima knew that God blesses good and punishes evil. Her problem was that she could not understand how God let her be raped when she hadn’t sinned against Him. She left her church because of her questions and her shame.

Her pastor, Pastor Assuni, used the first Scripture ever translated into Fatima’s language – Nyanga. Fatima’s questions were those of Job. She insisted that she was innocent and expected God to bless her. She could not understand why God would allow her to suffer. She then discovered that suffering does not necessarily mean God is punishing her or that she was wrong. Understanding this started the healing process, and Fatima has come back to church.

When traumatized people find others who have learned to listen to their stories and questions, they begin to engage with the Bible. They find Christ suffering like them while carrying the pain of the whole world, and they bring Him their hidden pain for release and healing. They see how the Gospel really is Good News.

(We are told that Jesus Christ Himself was perfected through suffering. For the moment it does not seem to be joyful but sorrowful, yet to those who have been trained by it, afterward it yields the peaceful fruit of righteousness.”)

Deadly Deceptions About Christians And Elections The Abundant Life