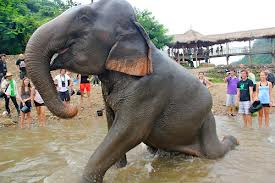 God’s wisdom is seen in the making of an elephant. The four legs of this great beast all bend forward in the same direction. No other quadruped is so made. God planned that this animal would have a huge body, too large to live on two legs. Male elephants can grow to 14 feet and weight more than 12,000 pounds (6 tons). They can drink 50 or more gallons of water a day. For these reasons He gave it four fulcrums so that it can rise from the ground easily.

Psalm 104:24-“O Lord, how many are Thy works! In wisdom Thou has made them all; the earth is full of Thy treasures.”

Matthew 6:28-29 “And why are you anxious about clothing? Observe how the lilies of the field grow; they do not toil nor do they spin.”

“Yet I say unto you, that even Solomon in all his glory did not clothe himself like one of these.”

God has caused the flowers to blossom at certain specified times during the day. Linnaeus, the great botanist, once said that if he had a conservatory containing the right kind of soil, moisture and temperature, he could tell the time of day or night by the flowers that were open and those that were closed!

The dandelion will grow above its surroundings whether the grass be 2 inches, 10 inches, or 20 inches, for it must get up into the sunlight.

Psalm 89:9-“Thou dost rule the swelling of the sea; when its waves rise, Thou dost still them.”

The waves of the sea roll in on shore twenty-six to the minute in all kinds of weather. Water will travel from the roots of a tree to the top-most leaf of a tree 265 feet high and no one understands why.

Ephesians 1:11, “Also we have obtained an inheritance, having been predestined according to His purpose who works all things after the counsel of His will.”

The lives of each of you may be ordered by the Lord in a beautiful way for His glory, if you will only entrust Him with your life. If you try to regulate your own life, it will only be a mess and a failure. Only the One Who made the brain and the heart can successfully guide them to a profitable end. Life without God is like an unsharpened pencil – it has no point.

I HOPE YOU FIND ALL OF THIS AS FASCINATING AS I DID.

ADDED THOUGHT FOR THE DAY:

When you carry the Bible, Satan has a headache, when you open it, he collapses, when he sees you reading it, he loses his strength, and when you stand on the Word of God, Satan can’t hurt you!

The Age Of Religious Fabrication Pt. 3 Rightside-Up Living In An Upside-Down World

Out Of The Mouths of Babes