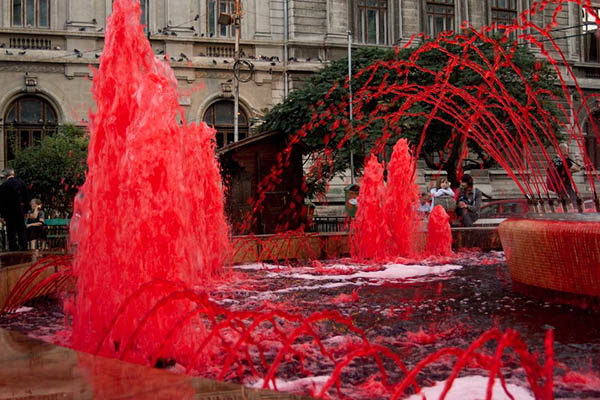 Sounds like a strange title for an even stranger teaching series. Fact is that there is no more un-mysterious, relevant, and on target truth than BLOOD BUILDERS 🔴!

However, AMERICANS, even religious types, have moved to the more palatable, middle of the road philosophy 🌓! Stay away from extremes 🌕🌑! One size fits all is the moderate, tolerant thinking of the day! BLOOD BUILDERS is far too severe and radical!

Moreover, certainly BLOOD BUILDERS is from ancient Greco-Roman barbarian history, but we have moved well beyond such paganism! The days of Maximus and the Gladiators is long gone, when Rome was built on the blood of the barbarian hordes and gladiatorial blood baths in the colosseum! The Roman citizens clamored for blood🔴sport! Much like we see on TV 📺 blood🔴sport today! Rome relived!

How far removed are we from the colosseum and the holocaust?

“WOE ❌ TO HIM THAT BUILDS A TOWN WITH BLOOD.”

“IN THIS WORLD , BLOODINESS IS SO OFTEN CONNECTED WITH BUILDING.”

We never make the obvious connection! It is just too gruesome for us to stomach 😝! Certainly we are too civilized and too sophisticated for such barbarian bloodiness! OH REALLY!!!

“HE WHO DELIGHTS TO SWIM IN BLOOD Will EVENTUALLY DROWN IN IT.”

Whether TOWNS, CITIES, NATIONS, EMPIRES, or GOVERNMENTS, the WOE of God’s wrath will fall 🚩 upon those who seek to profit through BLOOD SHEDDING.

God abhors bloody destroyers with an intense, immeasurable hatred ⛔! They will not escape the DIVINE WOE!

***
It is the only way we can understand God as the first advocate of CAPITOL PUNISHMENT! WHOEVER SHEDS MAN’S BLOOD 🏮, BY MAN SHALL HIS BLOOD 🏮 BE SHED! GENESIS 9:6!

BLOOD PUNISHMENT FOR BLOOD SHEDDING! Nowhere does God indicate that He has second thoughts, or that He has changed His mind!

“HE WHO THINKS HE HAS THE POWER TO TAKE LIVES, SHALL DISCOVER THAT HE DOES NOT HAVE THE POWER TO PRESERVE AND PROTECT HIS OWN FROM UNSPEAKABLE DIVINE WRATH!”

God actually takes the measure of towns and cities and how they were built, and who built them! Entire towns, cities, nations, empires have bloody vanished from the map whose histories were steeped in blood 🎯.

We must not forget that Jerusalem was rebuilt upon the bloody ruins of Babylon! Babylon had its turn in the inexorable circle of Divine Justice!

Washington D.C. is not only the CAPITOL OF THE UNITED STATES OF AMERICA! It is the judicial and legislative center that has proclaimed the WORLD’S BLOODIEST WAR on the innocent and defenseless – BABIES 🚼🚼🚼🚼.

The U.S. CAPITOL has become the DEAD SEA of murdered children drowned in their own blood. The United States Supreme Court has invaded God’s sovereign kingdom of the womb and is killing His babies, mocking God to His face. Hell 🔥 beneath the surface of Planned Parenthood promoted and protected by Washington D.C.

***
But why? We can find some answers in Christmas infamy in the person of Herod the Great! MERRY CHRISTMAS! BLOODY CHRISTMAS!

We can read all about it in Matthew 2:2 when Wise Men from the east came to Jerusalem inquiring,

“WHERE IS HE THAT IS BORN KING 👑 OF THE JEWS? WE HAVE SEEN HIS STAR 🌟 IN THE EAST, AND HAVE COME TO WORSHIP HIM.”

Their inquiry REACHED THE EARS OF HEROD, and it caused him great angst. Did someone of repute say that a KING HAS BEEN BORN IN MY KINGDOM? He now had to guard against a brand new threat 💫 to his throne.

There are two sins that accompany bloodshed. You might call them all BLOOD BROTHERS:
1. MURDER 😠
2. JEALOUSY 😵
3. SUSPICION 😡

The continual torment of jealousy and suspicion of those who may well be your competitor, or even worse, your superior! And if these sins of suspicion and jealousy take root, watch out! Then the jealous and suspicious person fears, and is to be feared 😠. The jealous husband kills his wife’s co-adulterer!

The way for Herod the Great to deal with his jealousy and suspicion of this unknown BABY KING is to kill all baby boys 🚼🚼🚼🚼 in His kingdom. It is called ELIMNATION BY MASS EXECUTION. Don’t leave one baby boy alive in your domain!

There could be no greater jealousy and suspicion than to be afraid of poor sucking infants. So insecure was his self-obsession that he could not consider himself secure on his throne unless he invaded nurseries and pierced cradles with a sword 🔪. Can you imagine, hearing 👂 the cooings of a baby as if they were the howlings of a wolf!?

Herod the Great, who shed buckets of innocent blood, died in his own bed. But He died with so much agony and horror, that for some days before he died, he desperately reached for a KNIFE 🔪 TO KILL HIMSELF.

Do you mean to say that we can be jealous and suspicious of babies 🚼🚼🚼🚼 too? Of course! They can infringe on our space, and take away our freedom. They are so limiting and so demanding. We must guard our self-interested lives, so kill them before they can invade our kingdom and usurp our throne! It is the OLD HEROD THE GREAT SOLUTION!

Under the presidency of Donald Trump, the BLOODY CAPITOL was being freed from its baby 🚼 blood lust. The baby blood 🔴 suckers were having withdrawal seizures.

But America in the last election is like a dog returned to its vomit! The BLOODY CAPITOL went backwards 🔙. The BLOOD BUILDERS, the BABY SLAYERS, salivating for baby blood, will continue to make HEROD THE GREAT LOOK LIKE A NOVICE!

Already over 50 million babies have been murdered in the shadow of the CAPITOL DOME! MEANWHILE, 290,000 Americans have been killed by COVID 19! WOE!

The HOLY CITY 🔯! The CITY OF DAVID! THE CITY OF GOD! Do you mean there are no exceptions to GOD’S BLOODY WOE!? You can’t be serious? No! Not even Jerusalem can be checked ☑ off the bloody list

It is more than telling in Jesus prophecies the ruin and destruction of Jerusalem, He connects it in Matthew 23:37 to the Jews in Jerusalem to this,

“THAT THEY KILLED GOD’S PROPHETS, AND STONED TO DEATH ❎ THOSE THAT WERE SENT UNTO HER.”

“JERUSALEM SHALL BE TRAMPLED UPON BY THE GENTILES.”

Yes, BLOODY JERUSALEM! The High Priest, the Jewish high counsel, and the citizens of Jerusalem called for the crucifixion of Jesus the Christ! They got their way, and freed a crook by the name of Barabbas instead!

Not long after that the Romans devastated Jerusalem, destroyed the temple, as well as killed 🔪, crucified 🔨, burned at the stake 🔥, sold 💰, and dispersed ⤴⤵↘ the Jerusalemites! WOE!

The Jewish dispersion that would last 2000 years, The miracle of Israel and Jerusalem resurrected from the dead is a wonder unparalleled in all of 🌎 world history!

The Romans did the exact heinous 📛 things to the Jewish people that they had done to Christ. Says Ezekiel in 24:6,

“WOE TO THAT BLOODY CITY!”

THE GOD OF LIFE – THE BLOOD OF LIFE

Why is God so ferociously vengeful 📛 against the BLOOD BUILDERS? It sounds so out of character for God Who I John 4:8 and 16 tells us:

1. The whole truth be told, God is much more than love! Fact is,

Life defines God! Life is Who and What God is! Eternal, perfect, infinite, beautiful LIFE 💠!

There is an ocean of meaning there the depths of which cannot be reached! But the enormous truth is this,

“GOD IS LIFE 💠 THAT HE GOT FROM NO ONE AND NOWHERE! ALL OF LIFE 💠 IS IN HIM AND COMES FROM HIM!”

Are you feeling this in your gut? Are you living it?:

“HUMAN LIFE, CREATED IN GOD’S IMAGE, IS AS HOLY, SACRED, PRECIOUS, PRICELESS, AND MIRACULOUS AS GOD 🔵!”

To murderously shed human blood 🔴 is the most blasphemous attack on God Himself. Man ‘s life was and is breathed into man by God. Life ultimately is not man’s to give, and it is not man’s to take!

DEATH 💀 is as antithetical and contradictory to God 🔵 as sin is to righteousness, as impurity is to holiness, as time is to eternity. as mortality is to immortality, as darkness is to light!

Each time human blood 🔴 is shed and human life is taken, it is the devil’s proclamation saying:

Satan is a murderer from the beginning. (John 8:44) Satan is the original SERIAL MURDERER. Satan exults death. He celebrates crematoriums and abortatoriums. He loves bloodshed! He extols everything that is the opposite of God. Hell is the CAPITOL of, and Satan is the MAYOR of towns 🏭 and cities 🏤 built on blood 🔴.

Satan is also the original LIAR! The consummate FALSIFIER! He is now propagating the sham that GOD IS NOT THE AUTHOR OF LIFE. Rather, DEATH HAS LIFE.

We are now seeing on TV 📺 and in the movies 🎥 that DEAD MEN CAN WALK, TALK, STALK, and of course, their favorite DRINK 🍷is BLOOD! THE WALKING DEAD 🗿.

“LIFE 🔵 AND DEATH 💀 ARE NOT INCOMPATIBLE AND NOT OPPOSITES!”

“BLOOD CIRCULATION 💓AND BLOOD SHEDDING 🔴 ARE VIABLE EQUIVALENTS, DEPENDING ON WHAT LIFE/DEATH STYLE YOU PREFER, THE WALKING LIVING OR THE WALKING DEAD.”

Anything to erase the stark polar oppositeness of LIFE 🔵 AND DEATH 💀, GOD 🔵 AND SATAN 🔴, HEAVEN 🌊AND HELL🔥.”

So now in 2020, we have governors lessening the punishments of cop-killers and police-blood-shedders. It is the inevitable consequence of a society in which LIFE IS CHEAP AND DEATH VALUED! KILL THE 🐖 PIGS is the cry of GODLESS HUMANITY!

GOD ABHORS SOCIETIES IN WHICH BLOOD SHEDDING IS REDUCED TO A MISDOMEANER, AND RAPISTS AND MURDERERS ARE SIMPLY FELONS.”

Have you ever had your blood oxygen level tested? Any measurement at 87 or below means not only discomfort in not getting enough oxygen to your lungs and body organs! It means that your life is ebbing, for your life is in your blood 🔴!

Have you ever heard the words,

“TO GOD THE BLOOD IS AS SACRED AS LIFE ITSELF!”

“TO SHED BLOOD 🔴 IS TO ATTACK GOD 🔵 HIMSELF WHO IS LIFE.”

For Jesus to DIE FOR OUR SINS AND ALL THE SINS OF THE WHOLE WORLD 🌎, HIS BLOOD HAD TO BE SHED, FOR LIFE IS IN THE BLOOD! JESUS BLED TO DEATH ON THE CROSS FROM THE HOLES IN HIS HEAD, HIS HANDS, HIS FEET. TO MAKE SURE HE WAS DEAD, THEY STUCK A SPEAR IN HIS SIDE 📛 FOR GOOD MEASURE.

WHEN HE AROSE FROM THE DEAD, HE AROSE WITH THE NAIL PRINTS IN HIS GLORIOUS RESURRECTION BODY. WE WILL NEVER FORGET THAT OUR ETERNAL LIFE IS IN HIS PRECIOUS BLOOD SHED FOR OUR SINS!

“OUR LIFE IS FOREVER IN HIS PRECIOUS BLOOD!”